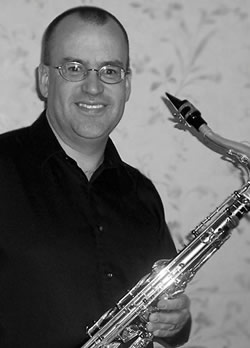 Vince Norman, the son of saxophonist Ray Norman who played with the big bands of Claude Thornhill and Charlie Barnett and with Bob Wills and the Texas Playboys in the late forties and early fifties, has been exposed to music all his life though his first official introduction to jazz was through his eighth grade band director, Paul Brewer. While playing with the Del City High School Jazz Ensemble he was offered his first gig with the Rick Swyden Big Band at age 16 and has been going non-stop ever since.
Vince attended the University of Central Oklahoma where he received jazz instruction from Dr. Kent Kidwell and Mr. Lee Rucker. In 1988, Vince left UCO to join The U.S. Army Field Band's "Jazz Ambassadors". He played jazz tenor sax with them for 15 years and has played concert tours in Europe, Japan, India, Mexico and Canada and has played in all 50 states except Alaska. He has performed with such notables as Arturo Sandoval, Clark Terry, Phil Woods, Butch Miles, Marvin Hamlisch, Toots Thielmans, Marvin Stamm, Jamey Aebersold, Tommy Tune, Hal Linden, The Four Aces, The Four Freshmen, The Temptations and even Joan Rivers. He has also performed with the National Symphony, the Baltimore Symphony and with the Cincinnati Pops at several venues including Carnegie Hall.

Vince has written numerous pieces for jazz ensemble as well as several orchestral "pops" commissions for a saxophone quartet called the Capitol Quartet that performs concerts with major symphonies worldwide. Vince is currently on the full time arranging staff for The U.S. Army Field Band and performs extensively in the DC/Baltimore area on saxophone and keyboards as well as playing drums at church each week.