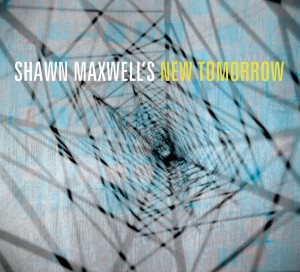 Saxophonist Shawn Maxwell's musicianship has been lauded by fellow musicians and critics alike as he's become one the preeminent performers in Chicago jazz. With several recordings featuring his quartet or his sonically expanded "Alliance," Shawn Maxwell's New Tomorrow adds the singular trumpet voices of three of Chicago's finest ­ Victor Garcia, Chad McCullough, Corey Wilkes ­ to his working quartet for a set of 9 modern, electric originals with 5 short interludes. Focusing on composition as much as improvisation, the quintets reveal stunning melodies hidden within complex time signatures, textures and grooves.

Midwest Record (Chris Spector)
What's a sax man to do when he wants to do something new and different without seeming precious? Rather than find some new country to exploit for world beat purposes, how about an era mash up? There are passages here when you can hear Louis' Nawlins, mixing with 50s daddio, mixing with Miles pushing his sax man du jour farther in to outer space ...

Chicago Jazz Magazine (Dan Healy)
Maxwell's latest disc with his New Tomorrow Quintet is an exciting extension of his edgy group approach that we have heard on previous albums. On Maxwell's last album, Alliance, he used a larger ensemble complete with an unusual collection of instruments, including guitar, voice and French horn. On that work Maxwell used the larger ensemble to expl ...

All About Jazz (Dan McClenaghan)
Chicago-based saxophonist Shawn Maxwell has produced an excellent run of straight ahead CD releases in the past decade, sets like his two self-produced discs, Originals (2006) and Originals II (2008), and Maxwell's House (Chicago Session LTD, 2010) before he changed his game up with Shawn Maxwell's Alliance (Chicago Sessions LTD, 2015), a shift a ...

New City Music (Robert Rodi)
Another local bandleader, Shawn Maxwell, is back with a new album and a new, smaller outfit. "Shawn Maxwell's New Tomorrow" doesn't have any trouble establishing an identity apart from 2014's ten-member "Shawn Maxwell's Alliance;" where the earlier album was more of a richly textured ensemble outing, here we've got a stripped-down program designed ...

AXS (Carol Banks Weber)
Back in September of last year, Chicago jazz saxophonist and composer Shawn Maxwell told AXS about a new quintet he intended to put together after successfully changing the genre with his 10-piece, pseudo-big band, Alliance, on two releases, the Feb. 18, 2014 all-original, self-titled album and a 2014 quickie EP, Bridge. Maxwell's New Tomorrow c ...

WDCB - Chicago (Paul Abella)
Shawn Maxwell's New Tomorrow features the alto saxophonist and flautist together with the rhythm section of Matt Nelson (keys), Junius Paul (bass) and Phil Beale (drums) and a trio of trumpeters, Corey Wilkes, Chad McCullough and Victor Garcia. Maxwell has hinted at jazz-funk-prog fusion before on previous albums, but never has the funk been more ...

WTJU - Richmond (Dave Rogers)
Shawn Maxwell (alto sax, flute) began his recording career in 2004 and since that time has fronted a variety of formats from large to small groups. For this disc, it's basically a quintet with rotating trumpeters: Victor Garcia, Chad McCullough, and Corey Wilkes. The other players are Matt Nelson (keys), Junius Paul (bass) and Phil Beale (drums). O ...

Downbeat (Michael Barris)
**** Reedist Shawn Maxwell has won fans with a handful of provocative albums that helped make him an exciting figure on the Chicago jazz landscape. New Tomorrow, which ads trumpet voices to Maxwell's regular quartet, sees the leader taking even more chances in his ongoing quest to surprise the listener. "Embraceable Excuses," the opening and ...

Jazz Weekly (George W. Harris)
Shawn Maxwell brings his writing skills to team up with his band of Victor Garcia-Chad McCullough-Corey Wilkes/tp, Matt Nelson/key-p, Junius Paul/b and Phil Beale. He switches between alto sax and flute, the latter being used on the Latin "Whole Hearted Half the Time" and soulful and hip "Hitting Streak." Most of the time, he brings his alto to tea ...

KUCI - Irvine, CA (Hobart Taylor)
Maxwell on alto and flute and his band New Tomorrow continue to confirm my conclusion that Chicago is the capital of jazz in America. The tunes are vibrant, contemporary and innovative, forward looking...expanding the jazz horizon rather than repeating the grand riffs of the past. The beats of the street are here as well as transcendent visions. Sp ...