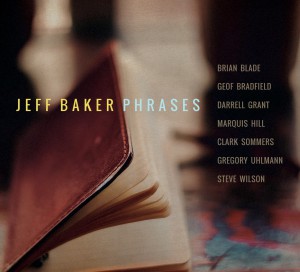 The songs, the arrangements, the musicianship, the group dynamic, the singing is near perfection.
ALL ABOUT JAZZ

Critically acclaimed vocalist Jeff Baker returns with his fifth OA2 Records release, an alive and bristling set of originals and thoughtfully conceived pop and jazz standards. Collaborating with some of the most influential and compelling jazz musicians in the world today - Brian Blade, Steve Wilson, Marquis Hill, Clark Sommers, Geof Bradfield, and Gregory Uhlmann - Baker and his co-producer/musical director, pianist Darrell Grant, present a provocative collection of original songs and arrangements based on text by writers such as Pablo Neruda, J.D. Salinger, A.A. Milne and Salvador Plascencia. Certainly, his most ambitious and personal recording yet.

"From all accounts, this charismatic crooner needs to be tracked closely. Mr. Baker has the potential to skyrocket to many accolade-coated triumphs." - JazzTrenzz

All About Jazz (C. Michael Bailey)
After a seven-year absence, vocalist/composer/arranger/educator and foremost fan of the Boise State Broncos, Jeff Baker has returned to the studio to add to his already impressive discography, which includes: Baker Sings Chet (OA2, 2004); Monologue (OA2, 2005); Shopping for Your Heart (OA2, 2007); Of Things Not Seen (OA2, 2009). The distance be ...

Downbeat (Editor)
Jazz vocalist Jeff Baker recruited some of the most respected musicians in jazz for his fifth album, Phrases (OA2 Records), which will be released Jan. 19. Participating in the recording sessions were drummer Brian Blade, trumpeter Marquis Hill, saxophonist Steve Wilson and pianist Darrell Grant, who served as musical director and co-producer. T ...

Downbeat (Michael J. West)
*** Phrases is a collection of beautiful, unquestionably soulful songs by singer Jeff Baker and a remarkable group of 11 musicians. The disc is moody and meditative, but spends about 80 minutes never altering its cast, to its detriment. The album's title applies to four of its six originals. Baker cribbed lines from his favorite writers, includ ...

Jazz Weekly (George W. Harris)
RINGER OF THE WEEK There aren't a lot of male vocalists who stray form the same old Great American Songbook, so a guy like Jeff Baker immediately grabs my attention, and should yours. He's got a low tenor-high baritone sound, and his style is like a troubadour, telling stories that feel personal and observant. You can't beat his ensemble here, as ...

Cadence (Robert Rusch)
JEFF BAKER is a vocalist of some originality which is nicely presented on PHRASES, a 5/19-24/17 date with Darrell Grant [p], Steve Wilson [as/ss], Geof Bradfield [ts], Marquis Hill [tpt], Gregory Uhlmann [gtr], Clark Sommers [b] and Brian Blade [drm]. There are a few things that distinguish this fine recording: with 11 tracks (six originals) and 75 ...

Amazon (Editor)
Phrases is a Real Treasure, 5-Stars Let me just say for the record, I am not a big fan of jazz vocal music. Of course there are notable exceptions, mostly consisting of those whose heyday was some time ago (see: Nina, Frank, Nat). But last week, I saw this singer I'd never heard of, Jeff Baker, show up in the new release jazz panel on Apple Music. ...

JazzdaGama (Raul da Gama)
The uniquely thoughtful and penetrating insights offered by Jeff Baker in an earlier recording, Of Things Not Seen (OA2 Records, 2009) (and indeed all of his other recordings as well) led to high expectations of Phrases - especially as the music is sung in such illustrious company, with Darrell Grant and others. And we are not disappointed. As one ...

Step Tempest (Richard B. Kamins)
Honestly, I have been returning to listen to the latest album from singer and songwriter Jeff Baker since it arrived at the beginning of 2018. "Phrases" (OA2 Records) is a 76-minute program that, on initial listens, struck me as a series of vignettes on love and loss as if Baker was working his way through a dark time. On a personal note, througho ...