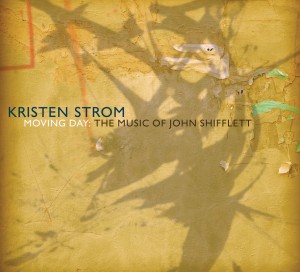 John Shifflett (1955 - 2017) was a beloved bassist, well-known as THE sideman in many of the San Francisco Bay Area's foremost ensembles and for traveling jazz dignitaries. Kept more as a guarded secret was his compositional skills and library of compelling and varied pieces of music. Saxophonist Kristen Strom, guitarist Scott Sorkin and drummer Jason Lewis played with John in their quartet and on countless other projects over the last 25 years. For this deeply heartfelt tribute to their friend, Kristen, Scott and Jason have arranged a collection of his compositions and brought together some of his esteemed Bay Area colleagues to perform, record, and celebrate his music. Without a doubt, a labor of love, and a testament to a life well lived in service to music, the creative process, and friends.

All compositions by John Shifflett (Comewego Music, BMI) except for "Franklin's Men/Northwest Passage," by Stanley A. Rogers (Fogarty's Cove and Cole Harbour Music)

Reviews of Moving Day: The Music of John Shifflett

Midwest Record (Chris Spector)
A recently passed Bay area bass ace finds his memory well represented by a saxy lady rounding up other pals and giving him a Viking's send off to Valhalla, without turning him into a smore. Represented here as the kind of cat you'd like to have backing you up, this solid swinger shows you what you missed living east of the Rockies. Tasty throughout ...

San Jose Summer Fest (Editor)
Saxophonist Kristen Strom has been one of the mainstays of the Bay Area jazz scenes for nearly two decades, playing with leading bands and helming the Kristen Strom Quintet. In this new project, she interprets the compositions of a legendary local hero: bassist John Shifflett, who passed in 2017. Strom has performed with many well-known artists, ...

WTJU (Dave Rogers)
Kristen Strom (soprano, alto, tenor sax, flute, clarinet) offers a beautiful tribute to her late friend and musical colleague by showcasing seven of his compositions and closing with a song of special significance for him. Scott Sorkin (guitar) and Ken Okada (bass) were also members of the quartet, which is completed by Jason Lewis (drums, percussi ...

All About Jazz (Jack Bowers)
The esteemed bassist John Shifflett was for roughly thirty years a mainstay in countless San Francisco Bay Area sessions and recordings until his untimely passing in April 2017. Gone, that's true, but far from forgotten. Shifflett, as it turns out, had another largely hidden talent as a composer of bright and accessible jazz tunes, seven of which a ...

CD Hotlist (Rick Anderson)
John Shifflett, who died prematurely in 2017, was one of the more in-demand bass players on the Bay Area jazz scene, very well-known to the cognoscenti there. What was less well-known was his tremendous gift as a composer. On this album, a shifting combo of his friends have gathered under the leadership of saxophonist/clarinetist/flutist Kristen St ...