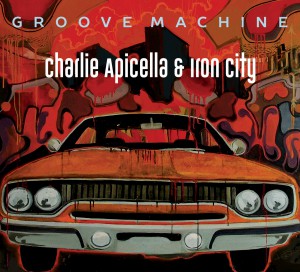 As a player, Apicella immediately brings to mind Grant Green. He's funky, he's bluesy, and he's not afraid to get dirty at times. Apicella and band have that perfect jazz rapport that allows them to be tight as hell and play off each other beautifully.
Vintage Guitar Magazine

Charlie Apicella & Iron City are a torch bearer of the classic guitar/organ sound and GROOVE MACHINE is a return to form for the New York guitarist's catchy, swinging original compositions. Straight out of the classic 1960s hard bop era and showcasing the band's deep interplay, the 3rd recording by Apicella, organist Radam Schwartz, saxophonist Gene Ghee, and drummer Alan Korzin, is packed with burning solos, Charlie's tight arrangements, and an unrelenting groove that defines the character of Iron City. Special guests include Freddie Hendrix on trumpet, Mayra Casales on congas and violinist Amy Bateman.

Midwest Record (Chris Spector)
Recidivist hard bop groovers to the point of having flawless Lou Donaldson and Willis Jackson tracks in their song stack, this bunch that takes it back to when Blue Note didn't care how Beatles were rolling over everything in sight proving that good taste is timeless and who ever says something like this is dated should probably be punched in the m ...

Jazz Weekly (George W. Harris)
Guitarist Charlie Apicella is swinging like there's no tomorrow with a boogie-ing team of Gene Ghee/ts, Radam Schwartz/B3, Alan Korzin/dr and guests Mayra Casales/cong, Freddie Hendrix/tp and Amy Bateman/vi on this sizzling organ grinder. The two horn front line with Hendrix and Ghee is a big and bold delight, with the team charging on "Three Si ...

CD Hotlist (Rick Anderson)
For a very different take on a guitar-led quartet, consider this, Charlie Apicella & Iron City's third recording. As its title suggests, these guys are mining a vein that was first discovered by similarly-configured ensembles during the "hard bop" era of the early 1960s: whenever you see a group that consists of guitar (Apicella), tenor sax (Gene G ...

All About Jazz (Don Phipps)
On Groove Machine, Charlie Apicalla & Iron City serves up a gumbo of styles that run from New Orleans blues and Chicago funk to Motown and New York bop. The combination makes for a "groovy" listening experience—road music that will keep the head nodding and the mind trucking. Apicella penned five of the eight numbers on the album. The other three ...

Nippertown (J Hunter)
There are guilty pleasures that you duck your head and mumble about when pressed, and then there are pleasures that make you stand straight & tall and say, "YEAH, I like that! Wanna MAKE SOMETHING out of it???" For me, the latter category includes any jazz disc where electric guitar and Hammond B3 organ come together. From the moment I first heard ...