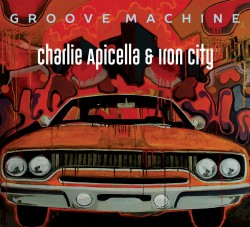 There are guilty pleasures that you duck your head and mumble about when pressed, and then there are pleasures that make you stand straight & tall and say, "YEAH, I like that! Wanna MAKE SOMETHING out of it???" For me, the latter category includes any jazz disc where electric guitar and Hammond B3 organ come together. From the moment I first heard Grant Green's 1962 Blue Note disc Grantstand (featuring Brother Jack McDuff on the B3, and Yusef Lateef making beautiful noise on tenor sax & flute), I was hooked for life, and I've been looking to satisfy that jones ever since.

A few years back, guitarist Charlie Apicella crossed my path in the form of his band Iron City's 2014 Zoho release Big Boss. My love for what I call the "New Great American Songbook" is well-documented, so when I heard Charlie & his partners open the disc with a dead-solid-perfect cover of Holland-Dozier-Holland's "I Hear a Symphony", I was All In. And it only got better, thanks to a sweet reboot of Hugh Masakela's "Grazin' in the Grass", a storming assault on the blues classic "Spoonful", and a righteous take on the aforementioned Grant Green's "Sunday Mornin'", all of it mixed with terrific originals that were totally faithful to the sound Green wrapped around my head too many decades ago. It was pretty obvious Apicella had learned a lot from Lateef, who was his teacher at UMass-Amherst.

Since then, Charlie Apicella & Iron City have been gigging around the northeast when they weren't putting out solid discs on Apicella's own Carlo Music label; most notably, his 2016 B.B. King tribute Payin' the Cost to Be the Boss was in my party-music rotation for a good long time. It also didn't hurt that Apicella had an ongoing recording relationship with one of the baddest trumpet players on the planet, the indomitable Freddie Hendrix. Hendrix appears on Iron City's latest disc, the killer OA2 Records date Groove Machine, which is another batch of white-hot originals plus a home run hit on Lou Donaldson's classic "Hot Dog." In short, the music matches the muscle car that graces the front of the disc holder.

Charlie Apicella may live in Brooklyn at the moment, but he's a lot closer to the Capital Region than I thought, as I discovered when Charlie took a few minutes to talk to me about this, that, and the other thing:

I learn something new every day. And one new thing I learned recently is that Albany Riverfront Jazz Festival is a "homecoming show" for you, because you grew up in the Capital Region, right?

That's right. This festival definitely takes on that personal note for me. My entire family was born in Hudson and I grew up in Troy. We moved around some and I went to college at UMass Amherst. I've been in Brooklyn for the past 10 years, not far from where my great grandparents settled after immigrating from Sicily before moving up to Hudson.

What's your earliest memory of jazz? Also, who was the jazz musician that made you say, "I want to do THAT for a living"?

The first person I heard immediately upon starting guitar lessons was Wes Montgomery, and I knew there was something very special about the music he was playing. I remember thinking this was a practice which would take my whole life to master, so I want to do that! Also at this time I discovered Charlie Parker's first recording session, and to this day one of the most important parts of the repertoire I have learned is his solo on "Billie's Bounce." It's very interesting to me the way the blues phrases he plays on saxophone fall on the guitar.

Can you remember the first time you played jazz in public - for money?

The first day of gigging I ever had was quite a bit of foreshadowing for the way my career has sustained itself, since my band had two gigs at two different venues on the same day. These were more recitals and were not paid, but still the ability to cram as much work into a short period of time requires exactly the type of stamina needed to succeed, especially in an environment like New York.

My first paying gig was also foreshadowing of my current career. The music department chair at UMass was contacted by the folks in charge of the dining hall and was asked if he could provide a jazz band every Sunday morning. He saw in me the ability to lead a band and offered me the job, which I played every week for the last two years of my time in college. I learned how to negotiate with the management, set up the band members for the correct payment procedure, rehearse new material, and keep a professional band together so this experience was invaluable at the time.

Guitar & Hammond B3 is like peanut butter & chocolate: You can't get a better combination! Has that always been the preferred configuration for you? What are your favorite things about that pairing?

The organist I collaborate with, Radam Schwartz, is a master and is acknowledged as a leading scholar in the history of organ jazz. I learned about the Chitlin Circuit in my study of people like Jimi Hendrix, BB King, and Pat Martino, and so many others. I've always been fascinated the way the careers of people like Jimi Hendrix intersected with jazz groups led by folks like Richard "Groove" Holmes, Jack McDuff, Grant Green, et cetera.

It turns out that the vibrant music scene in America at that time saw audiences that had an interest in music that put an emphasis on soul and groove, and many venues would program acts that conveyed those elements to an audience no matter if the musicians could be labeled jazz, blues, soul, R&B, or rock.

As Radam pointed out to me, the African-American audience at the time supported a more eclectic range of musicians then the jazz club or concert hall audience we typically associated with the history of jazz. Since the audience in these smaller neighborhood venues tended to enjoy a more blues-based, grooving, danceable music, the electric organ and electric guitar work together in a way the acoustic bass and piano just could not keep up with. Therefore, I take the view that the organ / guitar / drums combination was able to meet the needs of the audience in a way no other combo format could.

Along with covers of Grant Green and the Supremes, your Zoho disc Big Boss contains an original called "Idris", for Idris Muhammad. What was/is his influence on you, and on Iron City?

Idris Mohammed was the innovator behind so much of the late 1960s sound that our drummer Alan Korzin, and I enjoy. As hard bop records evolved to include more original tunes and groove tunes in the late 1960s, most of the best records from the era were driven by Idris's sound.

In studying Idris's sound and reading his autobiography, Alan was able to learn about the influence of Native American music Idris absorbed while growing up in New Orleans. The rhythm my tune "Idris" is built on is a Native American phrase more than an African phrase.

Your next two discs after Big Boss were tribute discs - one to Jack McDuff, featuring Sonny Fortune, and one to B.B. King. Where do those legends fit into your jazz life?

The connection both of those projects have for us are rooted in our fascination with the Chitlin Circuit. From the stories I have heard from friends like Dave Stryker, Pat Martino, and the musicians we collaborate with like Radam Schwartz and saxophonist Gene Ghee, I have taken the view that Jack McDuff's career pretty much embodies the view I have of paying dues, bouncing from town to town, and life on the Chitlin Circuit.

B.B. King was the first concert I ever attended, and Sonny Fortune was my first jazz concert, and I have been influenced by him ever since. The chance to finally work with him on that record was truly a dream come true. I had started booking gigs with him but, unfortunately, he passed about a year after we made the record. We were only able to do one concert together in that time and One Night Only turned out to be his last recording session.

B.B. King for me is a very personal connection since he is one of the musicians I was exposed to from my dad and his older brothers. I met B.B. in 1999, and when he passed, I was affected by it in a way that I wanted to celebrate his life the best way I knew how. Of all six of our records Paying The Cost is my favorite.

Your latest date Groove Machine is on OA2 Records, one of my favorite independent labels. How has your experience been with them?

Usually, I like to release the records on my own so I am in total control of the release date, packaging, and logistics. This time, I knew the folks at Origin/ OA2 were excited about the record and I was aware of their solid relationship with jazz radio and press, so it has been an honor to be a part of their roster.

There's no doubt they hit a home run for me since they were able to amplify my message and really get the attention of Downbeat magazine. They secured a feature interview for me in the current September issue and since this record is so strong with the right type of support from Origin, the committee at Downbeat nominated me in the 2019 Readers Poll for the first time.

For me, the next step with Origin is I hope to be invited to perform at their annual jazz festival in Seattle.

One constant in your musical journey has been Freddie Hendrix, who I consider to be one of the best trumpet players on the scene. How did you two hook up, and what's it been like to work with him?

Freddie is a great cat and a good friend. He happens to be the best ensemble player in New York, not to mention one of the most exciting soloists. Working with him really elevates the band because he is such a solid and consistent instrumentalist. In terms of arranging for the two horns and rehearsing for the recordings and gigs, he is an invaluable resource because his instincts for note choices and unison playing are so helpful.

You're the opening act at Albany Riverfront. What can the crowd expect for a table-setting performance from you?

Iron City has been described as the torchbearer of the true 1960s hard bop organ sound, and I think I can agree with that. As always, drummer Alan Korzin and I are joined by the masterful Radam Schwartz on organ. Radam is such a great performer, is a rock-solid musician, and adds so much energy to the group. For this concert we are so grateful the planets have aligned so we can have two of the most exciting women in New York jazz scene, Cuban conga master Mayra Casales and violinist Amy Bateman.

All About Jazz by Don Phipps