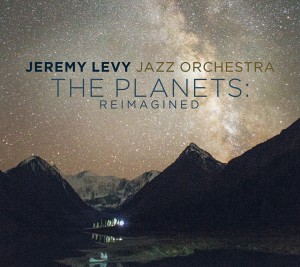 ...Levy has done something much more worthy than simply borrow Holst's language or swing his rhythms...(he) has made something new and invigorating of the original.
Howard Reich, CHICAGO TRIBUNE

Los Angeles-based composer/arranger/orchestrator Jeremy Levy has co-led the Budman/Levy Orchestra since 2007, played lead trombone with the Brian Setzer Orchestra, and has been involved in the upper reaches of the film, TV and video game music industry for well over a decade. Looking to create an ambitious project for his own jazz orchestra, Levy was inspired to adapt Gustav Holst's symphonic masterpiece while attending a performance at the Hollywood Bowl in 2017. With its harmony straddling romantic and jazz languages while its massive scale lent inspiration for the largest of film orchestrations over the decades, the suite provided Levy with sweeping and dynamic materials to develop. In the hands of his elite colleagues from the LA studio and jazz scenes, Levy's innovative arrangements are broad, bold and swinging.

"...contemporary big band music at its best." - All About Jazz

The Planets, Op 32, by Gustav Holst
Arranged by Jeremy Levy

Reviews of The Planets: Reimagined

Midwest Record (Chris Spector)
What's going on here? I was just saying that somebody sounded like they were recycling Tomita and here comes a protean entertainment composer/arranger going right to the source and redoing "Planets" itself. Bristling with the kind of energy Deodato brought to his classical reworkings, Levy makes his mark with this big band jazzed up version of "P ...

All About Jazz (Jack Bowers)
5-STARS The Planets, a picturesque seven-movement suite written more than a hundred years ago (1914-16) by the English composer Gustav Holst, has been marvelously Reimagined in a present-day framework by film scenarist Jeremy Levy and his superlative Los Angeles-based Jazz Orchestra in a medley that safeguards the tantalizing flavor of the origina ...

Downbeat (Bobby Reed)
EDITOR'S PICK For more than 100 years, music fans have been swooning over The Planets. The first public concert of Gustav Holst's seven-movement masterpiece occurred in 1920, when the London Symphony Orchestra performed it under the direction of conductor Albert Coates. It would become one of the most recognizable works of Western classical musi ...

Amazon (Nicole Brokloff)
Having various versions of Holst's The Planets: Halle Orchestra with Mark Elder on hyperion, Berliner Philharmoniker with Simon Rattle, and Orchestra symphonique de Montreal with Charles Dutoit. I wanted to explore something different. I pre-ordered Jeremy Levy, Holst's The Planets: Re-imagined. When the cd was released and arrived at my home I was ...

Amazon (Customer Review)
The ensemble writing and playing here is unbelievable! This music contains some very challenging stuff. The band includes top LA studio musicians. The soloists fit perfectly in each piece! The solists include Andy Martin, Alex Budman, Michael Stever, Tom Luer, and Andrew Synowiec. The mix is great. You can clearly hear each section. This album i ...

Jazz Weekly (George W Harris)
There must be something about Gustav Holst's The Planets that draws in jazz orchestras, as this is the 3rd or 4th interpretation I've come across. Arranger/conductor Jeremy Levin leads an impressive 20 member big band that includes lots of Big Phat Band members such as Jeff Driskill/ts, Francisco Torres/tb, Andy Martin/tb, and Andrew Synowiec/g, cr ...

London Jazz News (Leah Williams)
Jeremy Levy is a composer, arranger and orchestrator who has worked across a wide range of mediums and styles over the past decade. Originally from Hannibal, Missouri, the town where Mark Twain grew up, he is now based in Los Angeles. He is responsible for the orchestrations for Netflix's hit mini-series The Queen's Gambit. He recently received hi ...