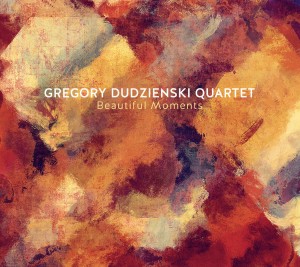 With a full, husky tenor sound in tow the former Bergonzi student brings to mind not only his former mentor but the timbres of Dexter Gordon and Joe Henderson as well.
Saxophonist Magazine

After 20 years on the move, including time spent living and performing in Europe, tenor saxophonist Gregory Dudzienski recently returned to Chicago, settling into a period of engagement with the city's mighty music community, and developing a cohesive group dynamic with like-minded colleagues. Finding bassist Kelly Sill, pianist Chris White and drummer Jeff Stitely, they quickly formed a musical bond that is evident on this collection of seven Dudzienski originals. Their dedication to the melodic, harmonic and rhythmic language of jazz of the late '50s and '60s, provides a substantial base for the group's explorations and growth.

"A great warm sound and his melodic way of playing is all heart." - Jerry Bergonzi

All music by Gregory Dudzienski - BMI

Midwest Record (Chris Spector)
With a few years and a few miles under his belt, a Chicago sax man comes home to kick it out daddio style with a few locals. Sounding like they are no strangers to pork pie hats and ciggys dangling from their lips, everyone knows their way around this sound and fury as this set takes it to the later hours when only the real, original hipsters were ...

All About Jazz (Jack Bowers)
There are many Beautiful Moments on Chicago-based tenor saxophonist Gregory Dudzienski's second CD under his name, some of which enfold his warm-blooded tenor, others the spirited give-and-take with his blue-chip quartet whose other members are pianist Chris White, bassist Kelly Sill and drummer Jeff Stitely. Yes, Dudzienski is heavily influenced b ...

JazzHalo (Belgium) (Georges Tonla Briquet)
Now and then you can enjoy a group that unpretentiously and without hesitation honors the golden Blue Note era. Tenor saxophonist Gregory Dudzienski does this on 'Beautiful Moments' on the basis of seven of his own compositions. It must be said that the man has several decades of experience in US Navy Bands with which he traveled the world. He e ...

Chicago Jazz Magazine (Hrayr Attarian)
Saxophonist and composer Gregory Dudzienski is Chicago's most eloquent proponent of the mid-20th century jazz sound. His lean and elegant compositions, warm and soulful tone, and expressive playing mark his work that is rooted in tradition yet refreshingly modern. The seven originals on Beautiful Moments are no exception. The swaggering vamps o ...

Jazz Weekly (George W Harris)
As soon as you put on this impressive album by Gregory Dudienski, you're going to ask yourself, "OK, who is he reminding me of?", but you don't have to go to far, as the first song's title gives it all away. "Dexter's Laboratory" has Dudzienski delivery a Gordonesque strong, confident and yet relaxed tone, as he's backed by pianist Chris White, bas ...

Cadence (Robert Rusch)
Tenor saxman, GREGORY DUDZIENSKI, has released BEAUTIFUL MOMENTS [OA2 Records 22183]. This November 2019 date has Chris White [p], Kelly Sill [b] and Jeff Stitely [drm] playing some excellent originals. If the music had been written and recorded by a first line jazz artist in the 1950s, they would have become jazz standards. Here is music that's ly ...