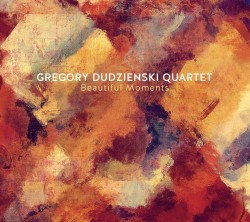 Now and then you can enjoy a group that unpretentiously and without hesitation honors the golden Blue Note era. Tenor saxophonist Gregory Dudzienski does this on 'Beautiful Moments' on the basis of seven of his own compositions.

It must be said that the man has several decades of experience in US Navy Bands with which he traveled the world. He even stayed in Europe for a number of years, more precisely Naples (Italy). He currently lives in Chicago where he met the musicians of his current quartet.

For fifty minutes, Dudzienski and his three companions allow all the basic elements of classical jazz to flow together in a natural way on 'Beautiful Moments'. The necessary references are not missing. For example, 'Dexter's Laboratory' is a firm nod to Dexter Gordon (and not to the popular Cartoon Network animation series of the same name). The fiery 'The Father' is a tribute to John Coltrane. Brazilian colors emerge in 'Tom-ish', an unvarnished link to the legacy of Antonio Carlos Jobim, another figure from Dudzienski's hero pantheon.

In the quiet 'Meeting Your Heroes' (weighed down by a strong Charles Lloyd influence) drummer Jeff Stitely provides the necessary enthusiasm. No standard on the program, although the velvet title track is based on the classic 'You're A Weaver Of Dreams', especially known in the version of Cannonball Adderley. It concludes with the fitting title 'See, I Told You' in stylish old school swing mode.

It is obvious that Dudzienski was apprenticed to Jerry Bergonzi. 'Beautiful Moments' is in any case synonymous with an unpretentious but solid jazz club repertoire.

Other Reviews of
"Beautiful Moments":