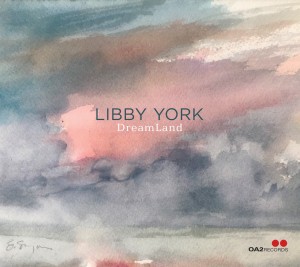 ...a jazz singer of cool composure and artful subtlety...
The New York Times

The Johnny Mercer classic "Hit the Road to Dreamland" evoked the state of mind for singer Libby York and so many performers as stages in 2020 long went dark, but ultimately gifting the thrill of revival two years later. Dedication to the music and craft has flourished since, along with the connection to audiences and the music itself. DreamLand was born from that landscape and York's chance encounter with guitarist Randy Napoleon, who was accompanying Freddie Cole at Chicago's Jazz Showcase. Randy's playing and warm enthusiastic manner set the stage for their gathering in the studio in Fall 2021 for this intimate set of songs, each pure, classic, compositional gems in themselves.

"..a gifted and experienced singer whose warm tone and sharp sense of humor bolster her restrained artistry." - The New Yorker

Jazz Weekly (George W Harris)
Vocalist Libby York gives casual and intimate servings of standards with the deft team of guitarist Randy Napoleon and bassist Rodney Whitaker, with drummer Keith Hall sitting in for a handful of mellow tones. There's a maturity to her calm enunciation of pieces like the gentle "Cloudy Morning" and patient "Estrada Branca". She sits well with Napol ...

BeBop Spoken Here (Lance Liddle)
It's hard to believe that it's close on nine years since I reviewed Libby York's last album, Memoirs. I raved about that one and, with this release, my enthusiasm hasn't waned. A soft, sensuous voice that sends shivers down my spine the way Peggy Lee's does when I listen to her classic Black Coffee album. DreamLand is totally different, yet in ...

Jersey Jazz (Joe Lang)
York loves lyrics and is a premier interpreter of the words to each song she sings. There is a jazz underpinning to her vocalizing, but she is always right there for each listener, no matter how sophisticated their musical tastes." Despite being on the scene for over 40 years, DreamLand (OA2 Records – 22208) is only the fifth recording from the ...

JW Vibe (Jonathan Widran)
Though life circumstances and immersion in another business led to somewhat of a late start in launching her singing career Libby York has more than made up for lost time, performing with the likes of John Di Martino, Warren Vache, Russell Malone and Renee Rosness – and dazzling fans and critics alike with a handful of critically acclaimed albums ...

Paris Move (Thierry Docmac)
Libby York isn't the kind of jazz singer who needs vocal pyrotechnics to captivate an audience. Whether she sings a ballad or swings a standard, her deep connection to the lyrics and her subtle improvisations on the melody convey an intimacy that makes each song feel like it tells its own life. On Dreamland, her latest recording and new opus, she o ...

Gina Loves Jazz (Germany) (Matthias Kirsch)
Singer Libby York‘s fifth album, and first after her 2014 release "Memoir", is an intimate and intensive affair, with just guitar and bass (and drums on four tracks) spread over 12 songs. And it suits her really well since her poignant and lithe vibrato shines throughout the set, starting with an elegant and gently swinging "Hit The Road To Dream ...