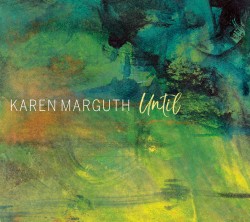 4-STARS Karen Marguth has hit the trifecta. That is, she's one of the few active jazz singers to have three DownBeat "Best Albums" of the year: Karen Marguth, in 2010, A Way With Words, in 2013, and now, Until.

Until, an assemblage of previously unreleased tracks recorded over the past 10 years, promotes the elevation of the spirit that one demands of a truly outstanding release. Marguth, with typical control and confidence,
carries poetry in music to an enthralling level. In the studio she's a magician, listening hard and responding in the moment to the playing of trusted colleagues like pianists David Aus and John R. Burr, the late drummer Brian Hamada, and trumpet soloists Gilbert Castellanos and Erik Jekabson.

One or two takes conjure urgency and joy. The Californian lends expression to moods and feelings drawn from her deep connection to the lyrics of songs she's specially chosen for refashioning.

She has her way with the title song by Sting, the Billie Holiday-identified "Comes Love," the Terry Callier ballad "What Color Is Love," the Columbian children's tune "La Ronda" (sung in Spanish), classics from Joni Mitchell and Paul Simon and, among a few more, the lovely original song "Maureen."

Close inspection reveals that grace — a triumphing good will, a tolerance for human error — is the unifying theme throughout.