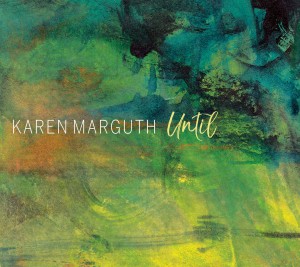 Her music is the work of a singer with a swift, light voice and the mobility and diction to roll like a Zephyr. She swings fiercely and scats with a proper abandon.
DownBeat Magazine

Based in the East Bay, vocalist Karen Marguth found her calling in jazz while living in Fresno, CA through the early 2000s. California's Central Valley sustains a surprisingly thriving jazz community and it was there that Marguth earned national renown with her four jazz albums, featuring the tight circle of musicians she surrounded herself with. Until features her interaction with two Fresno groups, along with a third, representing her latest collaborators from the Bay Area. Though presenting three distinct ensembles on an array of material recorded over the last decade, the album is remarkably cohesive and brimming with emotional generosity. From the strutting arrangement of "Comes Love," to the shimmering title tune from Paul Simon's 1983 release, "Hearts & Bones," or the closing, intimate duo rendition of "Days of Wine & Roses," Marguth shows an uncanny ability to mine hidden gems that others miss, while creating a warm & creative environment for her bandmates to thrive in. An artist who's still stretching her wings, she adds another consistently captivating chapter to her discography with Until.

Midwest Record (Chris Spector)
The East Bay jazz vocalist ties together stuff she's been working on in the last ten years since her last set and successfully walks that line between jazz vocal and cabaret. With three different crew each bringing their own special sauce, they show what it takes to cover Sting and Shel Silverstein on the same disc. Eclectic as anything and hitti ...

Riffs, Beats, & Codas (Vincent L Stephens)
Bay area vocalist and educator Karen Marguth hit the jazz recording scene with 2009's self-titled debut and has released a series of excellent albums. On 2015's Just You, Just Me is Marguth and bassist Kevin Hill build from the promise of previous efforts like her excellent Carrol Coates songbook A Way With Words by taking somewhat of a left turn. ...

DownBeat (Frank-John Hadley)
4-STARS Karen Marguth has hit the trifecta. That is, she's one of the few active jazz singers to have three DownBeat "Best Albums" of the year: Karen Marguth, in 2010, A Way With Words, in 2013, and now, Until. Until, an assemblage of previously unreleased tracks recorded over the past 10 years, promotes the elevation of the spirit that one dem ...

Take Effect (Tom Haugen)
A long running jazz vocalist who cut her teeth in California's Central Valley scene, Karen Marguth collaborates with 3 different groups on these tracks that were recorded over the past decade. "Comes Love" starts the listen with Richard Giddens' carefully plucked bass as Marguth's expressive vocals enter the cautious and adventurous jazz climat ...

Jazz Magazine (France) (Philippe Vincent )
Also to be discovered for those who do not yet know her, Karen Marguth is one of those excellent singers that America keeps to herself. Native of Minneapolis but living in California for a long time where she is a teacher, she has already recorded several albums which have been hailed by American critics. Always accompanied by excellent musicians, ...

Textura (Ron Schepper)
The fifth album from East Bay-based jazz vocalist Karen Marguth rewards on multiple levels. Mention first must be made of a lithe and attractive voice that elevates whatever material it attaches itsef to; her delivery throughout the eleven-track set is assured and engaged but not, thankfully, self-indulgent: for her, the song comes first. And speak ...

Jazz In (France) (Michel d'Arcangues)
Karen MARGUTH is an American singer based in Fresno, Southern California where the jazz scene is quite active. "Until" is her fifth album (1st on the Origin Records label) with 11 relatively unknown and rarely used themes in the world of Jazz, with the exception of "Days of Wine and Roses" by Henri MANCINI which closes the disc in public . Th ...

Jazz Magazine (France) (Philippe Vincent )
Karen Marguth is one of those talented American musicians whose notoriety has not crossed the Atlantic. Born in Minneapolis but settled in California for a long time, the singer is also a teacher and engages in various activities around music. She has recorded several albums acclaimed by American critics (especially Down Beat and Jazz Times magazin ...

Jazz Lives (Michael Steinman)
I've heard some jazz fans of a certain age say that the best days of the music they love are far behind them. "When I want to hear real _______, I just put on my [insert twentieth-century date] records by [dead people]. Nobody's playing / singing like that now." And an even more widely stated assertion is, "Nobody's making great CDs now because no ...