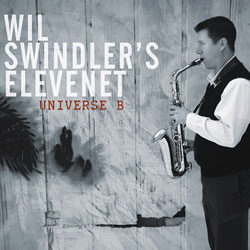 Wil Swindler, fresh off of a Gil Evans Fellowship endorsement, began putting together new pieces for his Elevenet in 2008. The key to the ensemble is the mix of fresh (and classic jazz-inspired) compositions with an interesting set of instruments. Rather than only using the standard horns, guitars, and such, Swindler invokes less common jazz sounds (indeed, many of those used by Gil Evans in his ensembles): French horn, bass clarinet, flute. Even a stray euphonium. The off-kilter instrument timbres immediately invoke some recognition of elements of Eric Dolphy and of Gil Evans (as well as Gunther Schuller), just by association with the rare sound. The sound is at times dramatic, as in the new composition "Glass." It's at times reminiscent, as in the seemingly Tadd Dameron-inspired "The Equestrian Pedestrian," and at times just a bit dark, as in the reworking of Billy Strayhorn's "A Flower Is a Lovesome Thing." It's never boring, however.

Other Reviews of
"Universe B":