Refractions is a beautiful album, one in which almost everything Richmond touches turns to gold.
Jack Bowers, All About Jazz

One of the most respected figures in big band jazz for two decades, LA-based saxophonist/composer/arranger Kim Richmond takes it up a notch with his latest recording "Refractions." Featuring his Concert Jazz Orchestra, Richmond blends a collection of original compositions and arrangements of classics into a lush, cinematic soundscape. "I am seeking a broader emotional palette for Jazz," states Richmond, "I feel that all too often Jazz, especially for large ensemble, expresses only a small range of emotions. My writing for this 24-piece jazz orchestra combines elements of both large ensemble jazz with free-swinging improvisation and symphonic colors and textures. This is truly an orchestra rather than simply a jazz band."

All About Jazz (Jack Bowers)
Refractions is a beautiful album, one in which almost everything composer / arranger Kim Richmond touches turns to gold. For one who was largely unimpressed by the Concert Jazz Orchestra's previous endeavors, that's saying a lot. But I'm only too happy to change course and sprinkle praise where it is due. If every album by a "concert orchestra" we ...

Music Dish (Ben Ohmart)
My favorite jazz label is back with something you don't hear every day. The Kim Richmond Concert Jazz Orchestra goes much further than the average big band. In fact, this isn't a big band in the accepted sense. It's more akin to an orchestra doing movie music. When the opening track starts, you'll think you've wandered in to a mid-70s Airport film ...

All About Jazz (Dan McClenaghan)
The twenty-four piece Kim Richmond Concert Jazz Orchestra boasts a full roster of instrumentation, including double reeds and French horns, for a sound that is somewhat rare in the professional jazz world, but familiar to anyone guiding a child through a high school music program with a "concert band." Lush and multi-layered, Refractions contains a ...

All About Jazz (C. Michael Bailey)
"...a lush cinematic soundscape." Kim Richmond is a Left Coast saxophonist and arranger who has won his bread performing in pop-oriented settings. Well respected and sought after, Richmond has made several recordings as a leader. On Refractions, he opts for an impressionistic/expressionistic big band sound, music that ebbs and flows, demanding t ...

Jazz Review (Woodrow Wilkins)
When one thinks of classical musical, centuries-old compositions by European masters usually come to mind. However, it's often been said that jazz is "American classical music." These thoughts emerge when playing Refractions, the new CD by the Kim Richmond Concert Jazz Orchestra. One of the most respected figures in big band jazz for two deca ...

All Music Guide (Adam Greenburg)
Los Angeles saxophonist Kim Richmond's album Refractions involves a full orchestra of players and that was done for the orchestral effect rather than the big band idiom you would usually expect. Richmond likes to blend concepts from the classical realm with those from the jazz realm, and full classical orchestration is one part of that. The main th ...

Mainly Big Bands (John Killoch)
I had heard comments to the effect that this particular compact disc was confirming Kim Richmond's place as the new Stan Kenton. With this thought in mind and remembering seeing and hearing the concert jazz orchestra in concert, and on the debut CD, I played the disc for the first time. I must admit that I wanted to hear the Kim Richmond I knew. Th ... 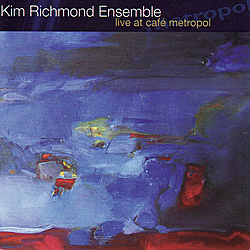