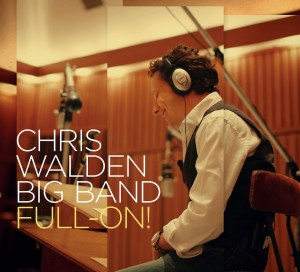 All About Jazz (Dan Bilawsky)
It's been a while since the jazz world has seen a release from this group. The first three albums credited to the Chris Walden Big Band - the Grammy-nominated Home Of My Heart (Origin Records, 2005), No Bounds (Origin Records, 2006), and Kurt Marti Suite (Origin Records, 2007) - came in quick succession. And then there was silence from Walden. Wel ...

Los Angeles Jazz Scene (Scott Yanow)
While Chris Walden has arranged and composed music for films, television shows and other artists’ records, he is most significant to jazz as the leader of his own big band. Full-On is his sixth CD as a leader and fifth since 2005. Full-On is an exciting album from start to finish. Walden contributed all of the arrangements, wrote five of the 1 ...

Blogcritics.org (Jack Goodstein)
It's been seven years since the last big band album from composer/arranger Chris Walden, the Kurt Marti Suite for big band and choir-much too long. But if it takes waiting that long for an album as fine as the newly released Full-On!, how can you complain? Los Angeles-based Walden has busied himself conducting and arranging for artists as diverse ...

AcousticMusic.com (Mark S Tucker)
You can't blame Chris Walden for taking seven years to issue another CD. He's so in demand that the guy barely has time to change socks before flying off to front another gig, score a movie, contribute tracks to a TV series, or arrange for any of a panoply of big names: Paul Anka, Christopher Cross, Diana Krall, Michael Buble, Michael Bolton, Nan ...

AXS (Carol Banks Weber )
Chris Walden’s been so busy scoring and arranging other people’s projects, he barely has time for his own music. The five-time-Grammy-nominated, German composer/arranger hasn’t put out his own record in seven years, not since the wonderfully received Kurt Marti Suite. He’s been too busy writing arrangements for stars like Diana Krall, Areth ...

Downbeat (Scott Yanow)
A busy arranger-composer in Los Angeles for the studios, films and television, Chris Waldon has also been leading a worthy if part-time jazz big band. On Full On! six singers are featured on seven selections, but Walden's orchestra is never merely in the background. In fact, with a few exceptions, the singers can be thought of as guest soloists wh ...

Audiophile Audition (Pierre Giroux)
This is a steamroller of a band with a refreshing and effortless relationship to the material. Although the era of the travelling big band is long over (even though nostalgia lovers still keep the “faux” Count Basie Band on the road for 180 dates a year), the sound and pulse of a good big band is still a thrill. Hence the delight that Chris Wa ...

!Earshot (Canada) (Jim Dupuis)
TOP TEN RECORDS OF 2014 Thankfully there are still some big bands out there and Walden has put together a bunch of fine musicians to play his varied arrangements. The band can jump from the movieish sounding “Bailout” to pop and country covers of Stevie Wonder and Hank Williams. Like the 1940’s this big band has a rotating cast of vocalists t ...

Jazz Scan (Ric Bang)
If Chris Walden is unfamiliar, you've some catching up to do. He mostly creates musical settings for major stars such as Stevie Wonder, Michael Buble, Diana Krall and Neil Young - as he puts it, "That's where the money is" - but his real joy is big band jazz. This is his newest release in that genre. Walden was born in Hamburg, Germany, apparent ...