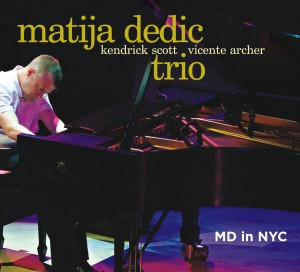 Dedic's phrasing is unpredictable and exciting, and he has a very definite time-feel that is all his own.
- Jazz Improv

From the first note on this recording, Matija Dedic captivates with musicality and maturity as a pianist and composer. His treatment of jazz classics such as "Blue and Green" and "Maiden Voyage," as well as his rendition of Sting's "Fragile," are performed with calm and confidence while maintaining a beautiful touch on both the acoustic piano and Fender Rhodes. Son of the famous Croatian singer/songwriter and poet Arsen Dedic, and pop singer Gabi Novak, Matija is a star in his own right in the Eastern European jazz scene where he has won numerous awards over the last decade. Here, he's joined by the dynamic New York rhythm section of bassist Vincente Archer and drummer Kendrick Scott.

Reviews of MD in NYC

All About Jazz (Dan McClenaghan)
Pianist Matija Dedic's MD in NYC tiptoes into existence on a delicate rhythm, joined in short order by a sprinkling of crystalline notes in the melody, with a whisper of brushes and spare but assertive bass lines. "Her Name" is one of the pianist's five originals in the set, and has a wistful reverence that speaks, perhaps, to a yearning infatuatio ...

Stereophile (Thomas Conrad)
Jazz has become a truly international art form in the new millennium, and some of its most creative players now come from places like Zagreb, Croatia. What makes Matija Dedic special is his touch and the way his poetic concept unfolds and deepens over the course of an album. Dedic is as seductive as Tord Gustavsen. The opening of the first track he ...

Jazz Scan (Ric Bang)
This album demonstrates anew that jazz truly is an international art. Matija Dedic, born in Croatia in 1973, began to play classical piano at age 5: a common path for Eastern European music students. He had broadened his interests by his 18th birthday, and he subsequently entered the Graz Jazz Academy. After graduation, he delivered his style of ja ...

Cadence (David Franklin)
Matija Dedic is a 38-year-old Croatian piano virtuoso who has played around the world with leading Jazz performers, including a number of well-known Americans, and won numerous awards world-wide. Bassist Archer and drummer Scott both boast extensive, impressive credentials. The modern mainstream MD in NYC is Dedic's second album and the first with ...

Jazz Talent.com (Dustin Garlitz)
Zagreb, Croatia?s Matija Dedic is emerging as one of the most important rising stars on Continental Europe?s jazz scene. His modern piano trio performances with sidemen Vincente Archer and Kendrick Scott certainly qualify him as a significant up-and-coming jazz artist hailing from this particular region of Europe, if not the continent as a whole. ...