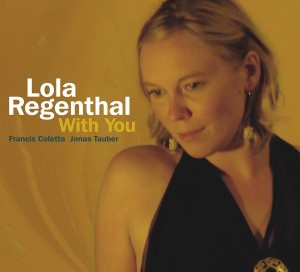 In a subdued recital of originals and standards, Lola Regenthal's rich voice combines with the Swiss duo of guitarist Francis Colleta and Jonas Tauber on bass and cello for a compelling and auspicious debut. Now based in Bern Switzerland, Lola grew up in a musical family in the countryside of the Swedish island of Oland where she began playing drums at age ten and singing at fifteen, later studying voice at the Hogskolan fur Scen och Musik in Goteborg. Here, on her debut recording, Lola presents six of her compositions that speak from the open spaces of southern Sweden, of love, creativity, and art, combined with some of her favorite songs including "My Shining Hour," "This Masquerade," and "Chega De Saudade."