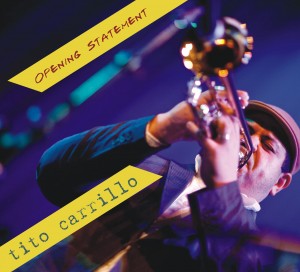 If this outstanding CD is Carrillo's opening statement, I can't wait for the full argument.
-Hrayr Attarian, Chicago Jazz Magazine

A confluence of the post-bop trumpet legacy of Miles, Hubbard, & Shaw, along with the complexities of Cuban rhythms, lyrical ballad phrasing, and boundary-breaking free exploration, "Opening Statement" is a powerful recording by one of the more prominent fixtures on the vibrant Chicago jazz scene of the past 15 years. Though having appeared on over 20 CDs alongside luminaries such as Willie Pickens, Chuchito Valdes, and even pop icon Phil Collins, this project marks trumpeter Carrillo's first recording as a leader, revealing a singular modern trumpeter with an expressive and original compositional voice.

17 Dots, eMusic Blog (Jonah Powell)
It's a story line that jazz fans encounter from time to time? long-time session player finally records an album under his or her own name. I can't help but cheer that effort and hope it works out. Being a team player is a noble calling in any field, but in jazz where the performance of the various pieces in the ensemble can create a whole so much g ...

WDCB - Chicago (Lloyd Sachs)
Origin Records may be based half a country away in Seattle, but it has become the mainstream Chicago jazz label, documenting our scene in recent months with terrific albums by the Deep Blue Organ Trio, Geof Bradfield, Dana Hall and Bobby Broom. A few weeks ago, I reviewed an Origin album by Chicago legend Ira Sullivan and Windy City crony Stu Katz. ...

Chicago Tribune (Howard Reich)
Friday was a big night for trumpeter Tito Carrillo. Though he had played the Green Mill prolifically since 1996, when he moved to Chicago, and though he had commuted here regularly since joining the faculty of the University of Illinois at Urbana-Champaign in 2006, Carrillo never had led his own group at the Mill. Moreover, his belated Green ...

Chicago Examiner (Neil Tesser)
Carrillo, celebrating the release of his debut album "Opening Statement" (Origin), has built on the hard-bop foundations of modern jazz to construct a strong and supple style that's at home in several of the city's most exciting current bands. At the Green Mill, Carrillo's band stars most of the heavy hitters from his album - saxist Geof Bradfie ...

The Jazz Word (John Barron)
Trumpeter Tito Carrillo opens his debut disc Opening Statement with the fast-paced, energetic original piece "Truth Seeker." The title of the tune suggests someone on a personal quest for enlightenment. Whatever the case may be, the Chicago-based musician seems to have found a form of musical truth in an unabashed, fiery trumpet style, rooted in th ...

Chicago Jazz Magazine (Hrayr Attarian )
Trumpeter Tito Carrillo's debut, Opening Statement, is a musically intense record that starts with a bang, with the hard bop "Truth Seeker," a tune that harkens back to 1950s and '60s Blue Note sessions. Carrillo's burnished trumpet is paired with the Geof Bradfield's agile, muscular tenor saxophone creating a classic sound that is enhanced by Dana ... 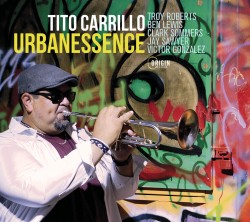