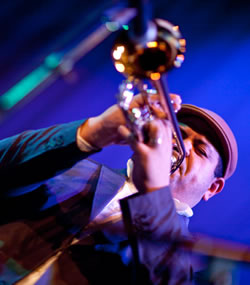 ...musical truth in an unabashed, fiery trumpet style, rooted in the post-bop styles of Woody Shaw and Freddie Hubbard and laced with a tinge of Latin American soul.
John Barron, The Jazz Word

Tito Carrillo is one of the finest trumpeters to emerge from Chicago's rich jazz trumpet legacy. He is an accomplished trumpeter, educator, bandleader, and composer, and since 1996 he has been a fixture in the Chicago jazz and latin music scenes.

Carrillo has played some of the most prestigious venues in the world, including Chicago's Symphony Center, Carnegie Hall, the Kennedy Center, and London's Royal Festival Hall. His work has been heard at international jazz festivals in Chicago, Telluride, Montreaux (Switzerland), the Netherlands, and Finland. He has appeared on over 20 CD recordings in his 14-year career, as well as the concert DVD "Quincy Jones: Live at Montreux 1996".

Tito Carrillo is also active in jazz education, and was appointed as full-time jazz trumpet professor at the University of Illinois at Urbana-Champaign in 2006. Prior to his appointment at Illinois, he served on the faculty at the Chicago College of Performing Arts at Roosevelt University, as well as at Northwestern University. He also has helped to spread jazz awareness to Chicago's inner city schools through the Ravinia Jazz-in-the-Schools outreach program. He presently continues an active career as a guest artist/clinician at secondary and collegiate jazz programs across the nation.