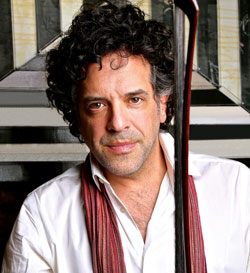 Raised outside of Chicago in Lincolnwood, Illinois, Lorin's childhood was filled with the arts. His mother Muriel, a music teacher, played guitar, piano, and violin. Beginning on alto saxophone in fourth grade, Lorin picked up the bass guitar at 14 so that he could "jam" with his guitar playing older brother Elliott and his cousin, the pianist Ryan Cohan. Influenced by his brother's love of Chicago blues and classic rock, Lorin eventually discovered Jaco Pastorious, Chick Corea, and ultimately, straight ahead jazz.

Lorin was a student of the pioneering bass guitarist Anthony Jackson at The Manhattan School of Music from 1990-1991. He received his B.A. from Northwestern University in 1995.

Taking up the acoustic bass at the age of 25, Lorin studied with noted Chicago bassist Larry Gray and Joe Guastefeste (principal bassist with the Chicago Symphony). In 1998, Lorin received the Blue Note Records Scholarship at the Skidmore Jazz Workshop.

Since 2005, Lorin has toured the world with jazz great Monty Alexander. He is featured on the pianist's latest two recordings for the Chesky label, The Good Life: Monty Alexander Plays the Songs of Tony Bennett and Calypso Blues: The Songs of Nat King Cole.

Lorin's longtime collaboration with 2008 Guggenheim Fellow Ryan Cohan has included tours of the U.S., Canada, Europe, Russia and Africa. He also appears on three recordings with the composer/pianist: Here and Now (Sirrocco/2000), One Sky (Motema/2007), and Another Look (Motema/2010) featuring vibraphonist Joe Locke.

Lorin has spanned the globe to foster cultural exchange through music. As a "Jazz Ambassador" for the U.S. Department of State and the Kennedy Center, Lorin toured Southeast Asia in 2004, performing and teaching in Vietnam, Thailand, Indonesia, Pakistan, the Philippines and Bangladesh. The Yamaha Musical Instrument Corporation chose Lorin to "road test" their "Silent Bass" for the tour.

He spent February of 2008 with the Ryan Cohan Quartet on a five country tour of Africa and the Middle East as part of ?The Rhythm Road: American Music Abroad? program sponsored by the U.S. State Department and Jazz at Lincoln Center. Lorin and his band mates were selected by a panel headed by Wynton Marsalis to perform and conduct workshops throughout Rwanda, the Democratic Republic of Congo, Uganda, Zimbabwe and Jordan. Based on the success of that tour, the same group was selected for a second time to tour Russia, Belarus and the Ukraine in February of 2009.

Lorin's musical experiences are not limited to the world of jazz. He played for the Chicago run of the Tony award winning musical Jersey Boys from 2008-10. His thumping bass guitar grooves and original songs drive the R&B/Jazz/Hip-hop band Vertikal's live performances and on the band?s forthcoming debut release.

As an educator, Lorin has taught extensively both in his private studio, as well as through many programs with the venerable Jazz institute of Chicago. He has mentored gifted high school students through the Jazz Institute?s Jazzlinks and Young Jazz Lions programs, acting as the artist mentor for the Jazzlinks student council in 2009-2010. Additionally, since 2008 he has been an instructor for the Jazz Ambassador program, a partnership between the Jazz Institute and the Chicago Park District a highly selective summer training program for Chicago high school musicians.

The City of Chicago and the Illinois Arts Council has awarded Lorin with two Community Arts Assistance Program Grants, first in 2006, and most recently in 2010.