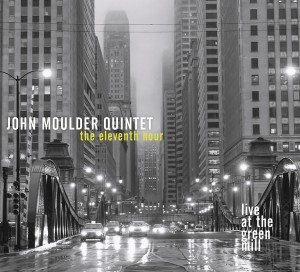 Known for his ability to create masterful studio recordings of his sweeping, cinemagraphic musical visions, the guitarist here transports a live audience at Chicago's venerable Green Mill Jazz Club. Of the performance, the Chicago Tribune's Howard Reich wrote, "...the music-making often achieved a quiet serenity, bringing a capacity audience to a whisper. There's simply no way to converse when music of such profundity and grace is unfolding." Along with saxophonist Geof Bradfield, pianist Jim Trompeter, Larry Gray on bass, and his long-time collaborator Paul Wertico on drums, Moulder adds another dimension to he powerful body of work.

Reviews of The Eleventh Hour

Chicago Tribune (Howard Reich)
If Chicagoan John Moulder had decided to become a full-time jazz guitarist rather than a Catholic priest who plays guitar, he probably would be quite famous, for his virtuosity as an instrumentalist is matched by his ferocity as a performer. Then, again, he wouldn't be the man he is now, an artist who views faith and music as expressions of the sa ...

All About Jazz (Dave Sumner)
Whereas many of Chicago's jazz and blues guitar icons seem to channel the dark alleys and the bar sign neon of the city through their instruments, John Moulder's sound is more akin to a synthesis of the lakefront -- a beauty and serenity that is just as likely to show a face of fury and cold precision. For some time now, Moulder has quietly been de ...

Chicago Tribune (Howard Reich)
Last July, as Chicago guitarist John Moulder was preparing for a two-night run at the Green Mill Jazz Club, veteran Chicago recording engineer Ken Christianson offered to record the sessions. Moulder didn't hesitate, even though he would be performing with the creative young Chicago saxophonist Geof Bradfield for the first time. With pianist Ji ...

The Jazz Word (John Barron)
Chicago guitarist John Moulder delivers an impressive live set with his quintet on The Eleventh Hour, recorded at the legendary Green Mill jazz club. Moulder's compositions tend to lean on modal frameworks with odd-metered grooves. His pieces have accessible qualities while presenting daunting musical challenges to the players involved. A thoughtf ...

Jazziz (Bill Meredith)
New York City may be where jazz musicians go to seek stardom, but Chicago is no Second City for those looking to work. That lesson's clear to guitarist John Moulder, who teaches at nearby Northwestern University (where he earned a master's in music) and has crafted a 20-year recording career, culminating in the banner work on "The Eleventh Hour ...

Chicago Jazz Magazine (Dan Healy)
The Eleventh Hour: Live At The Green Mill features guitarist John Moulder showcasing his original compositions with a stunning quintet. To put it succinctly, this recording represents modern jazz at its best. Moulder?s compositions are amazingly creative and stimulating, taking fascinating twists and turns and also giving his talented bandmates the ...

Cadence (Bill Donaldson)
Though John Moulder has been recording and performing for twenty years now, his name recognition hasn?t risen to that of the top ranks of jazz guitarists. It really should. No exaggeration. His most recent album, The Eleventh Hour: Live at the Green Mill, is proof of that. Apparently the result of serendipity, the album exists because recording eng ... 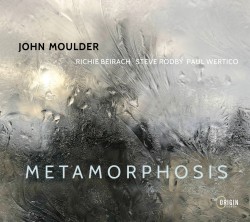