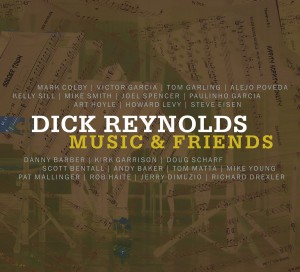 Through the jingle house he co-founded in the 1960s, composer, pianist, arranger and producer Dick Reynolds ruled Chicago's commercial recording scene throughout its heyday, supplying the world with thousands of melodies and slogans, many still recognized today. By then, he had also been the house pianist at the famed Mr. Kelly's for over a decade, where he accompanied all the greats of the period including Mel Torme, Sarah Vaughn, and Carmen McRae. With "Music & Friends," Reynolds steps back into the studio he left at retirement in 1996, creating a joyous, hard-swinging session with a reassembled band of many of the musicians he worked with over the years, including Howard Levy, Mark Colby, Mike Smith, Kelly Sill, and many more of Chicago's finest.

Jazzespress (Lloyd Sachs)
Back in the '60s, Dick Reynolds was the house pianist at Mr. Kelly's, Chicago's famous Rush Street club where stars like Sarah Vaughan and held forth. He also was a king of the commercial jingles jungle. Reynolds has been in retirement since 1996, but he doesn't sound retiring on Music and Friends, a lively, impeccably arranged big band effort whos ...

Midwest Record (Chris Spector)
Long time Chicago jingle meister Reynolds always seemed to find the energy to step outside the domain he ruled and do other musical things. Whether trying to develop rock bands, being a high profile night club accompanist or keeping big band alive, Reynolds managed to find the time and money to do it. Here we find him going back into the recordin ...

Jazz Society of Oregon (George Fendel)
The liner notes indicate that Reynolds has spent much of an honorable music career as a do-everything musician in Chicago. All well conceived work, to be sure, but I have this notion of having seen his name on scores of albums by quality pop and sometimes jazz singers "back in the day." The "friends" referred to in the title are both the talented p ...

Jazz Scan (Ric Bang)
I've not heard a real "dance band" for quite some time. This organization, headed by pianist Dick Reynolds, falls very nicely into that category. In the 1960s, Reynolds was the house pianist at Mr. Kelly's Jazz Club, in Chicago; in that capacity, he worked with the likes of Mel Torme, Sarah Vaughn, Carmen McCrea and many others. Reynolds subseq ...