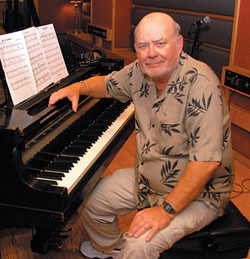 Dick Reynolds ruled the roost in the 1960s and 70s, when Chicago's commercial recording scene was in its heyday--when jazz musicians could get paid for recording a McDonald's ad before lunch and exercise their creative chops after dinner. In fact, Reynolds played a key role in the evolution of that halcyon era; he co-founded Com/Track, arguably the leading Chicago jingle house of the late 60s, 70s, and 80s. By then, Reynolds had already enjoyed a separate career as house pianist at Mr. Kellys, the world-famous Rush Street jazz haven, accompanying such iconic vocalists as Mel Torme and Carmen McRae. And even later--at the height of his commercial studio days--he maintained his jazz credibility by playing every Tuesday night (with the group Ears) at Andy's, the world-known Chicago club.

But for more than a decade, Reynolds has spent most of his time indulging his two other passions: relaxation and piscation. He handles the first of these at his homes in Michigan (Saugatuck, in the spring and summer) and Florida (Longboat Key, in the fall and winter). And you can gauge his commitment to his other passion from his nickname, "The Fishin' Musician."

Anyone who's gone fishing knows that it frees the mind to wander among memories. In this case, those recollections concern the brilliant musicians who Reynolds has worked with over the years--like Chicago percussion ace Ruben Alvarez and the late violin guru Johnny Frigo--or those artists that inspired him, such as Stan Getz and Nancy Wilson (whom Reynolds also accompanied at Mr. Kelly's). Some of the tunes recall lesser-known friends; others conjure the rhythms and genres and breezy melodies of a lifetime spent on stage and in the studio--all of them affectionately painted in portraits of sound by a master colorist.

So sit back and, whether or not you have a fishing pole in your hand, let Dick Reynolds fill you in on what he's been thinking while out on the pond. "Music And Friends" is a mellifluous missive from a guy we've missed for a bit too long. 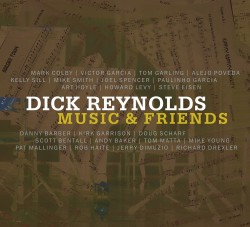