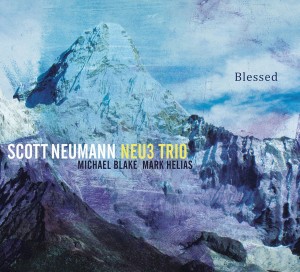 Brooklyn-based drummer/composer Scott Neumann presents a new trio with the internationally acclaimed musicians, saxophonist Michael Blake and bassist Mark Helias. They all have extensive experience in the trio setting allowing them to break away from the stereotypical responsibilities of their respective instruments. Neumann's original compositions contain a balance of lyricism, rhythmic pulse and openness of structure, maximizing the bold improvisational capabilities of each of these fine musicians, resulting in a sound that is enjoyably fresh in it's creative endeavor.

Midwest Record (Chris Spector)
Not your typical drummer led jazz trio, this drum/bass/sax outfit sounds more smoky, hipster club than church basement as they push their free jazz agenda that pushes the envelope but not to the point having a flashing, neon signing blinking on and off saying "ART HERE!." Tasty stuff that has a canny way of pulling you in without making you clau ...

Chicago Reader (Peter Margasak)
Track of the Day - Over the last decade and a half or so one of my favorite jazz saxophonists has been Michael Blake, the Vancouver native who first made his name as a member of one of the final lineups of John Lurie's Lounge Lizards. That's not the context where I first heard Blake, and to be honest I've enjoyed his work on his own much more. H ...

All About Jazz (Mark Corroto)
As it is written, in the end we will all stand naked before our God. Be it Yahweh, Gitchi Manitou, Sam Walton or, in drummer Scott Neumann's case, Elvin Jones, there is no time better than right now to make preparations. His bags get packed to meet the his maker on Blessed. The denuded state can be referred to, in musical terms, as his stripped ...

Tone Publications (Jim Macnie)
Sometimes success is a by product of simple chemistry. The members of drummer Scott�Neumann's Neu3 Trio don't boast the largest profiles in jazz. Neither do they arrive with lofty concepts about the way the music should change. Indeed, Blessed makes its mark by betting the farm on two of jazz's bedrock elements: grace and rigor. Neumann�enli ...

Jazz Weekly (George W. Harris)
Ringer of the Week - Many aspire, but few attain. That holds not only for salvation, but for putting together a tenor trio recording. Drummer Scott Neumann attempts the climb from the North Side of the Mountain, leading a band from behind with Michael Blake, who also brings his soprano sax and melodic to the studio here, and bassist Mark Helias. Ma ...

All About Jazz Italia (Vincenzo Roggero)
This disc came from the desire of drummer Scott Neumann to perform in a trio with Michael Blake, a saxophonist he's known since 1985 and crossed paths with through various projects. Mark Helias' musical history, personality and open-minded approach are the elements that led the leader, without hesitation, to choose the bassist for the project. Th ...

Downbeat Magazine (Ken Micallef)
**** (4-stars) Scott Neumann's sophomore solo release is not a blowing but a simmering session. His exceptional trio, with saxophonist Michael Blake and bassist Mark Helias, creates a furnace of ideas where creativity is inspired, swing incessant, and the performances exhilarating. The trio revels in a simpatico exchange. Precise movements and ...

Jazziz (Michael Roberts)
There's no denying the respective talents of drummer and composer Scott Neumann, saxophone and melodica player Michael Blake, and bassist Mark Helias. And thanks to the spacious sound of Blessed, the Neu3 Trio's studio debut, each player's contributions come through loud and clear. However, while the project is undeniably tasteful and enjoyable ...

All About Jazz (C. Michael Bailey)
Drummer Scott Neumann hosts multi-reedist Michael Blake and bassist Mark Helias in nine compellingly free original compositions plus one well-selected Roswell Rudd piece. This recording is not without its Monk influence. "Keep Your Heart Right" is right out of the Monk rhythmic playbook via Roswell Rudd, with a theme that trips over itself while ...