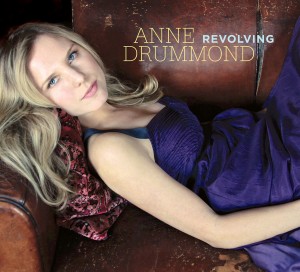 ...(Drummond's) fine technique is imbued with spirit and imagination.
-JazzTimes

New York-based flutist and pianist Anne Drummond established her career with multiple recordings and international tours with Kenny Barron, Stefon Harris and many others throughout the early 2000s. With "Revolving," she draws from her repertoire of favorite originals to create a warm and diverse recording. Playing alto and soprano flutes as well as piano, she executes her concise, colorful melodies with an ease that is also reflected in the artistry of her world-class bandmates. Pianist Benny Green offers sweeping satisfaction with two of his first recorded originals. Percussionist Keita Ogawa lays down worldly grooves, and Brandi Disterheft serves the music with exceptional bass work. Guitarist Vic Juris, cellist Dave Eggar, drummer Kassa Overall, and pianist David Chesky also contribute great meaning and insight to this eclectic and sweeping set of original compositions.

Midwest Record (Chris Spector)
After spending the last decade working with the kind of jazzbos that figured out how to avoid being a starving artist without selling out, Drummond continues to step out on her own, spreading her wings farther with each outing. It's unavoidable acknowledging the DNA behind this recording---jazz, new age, world, some saloon, some samba, some classi ...

Amazon.com (R. Waldron)
Ms. Drummond does it again - and contrary to the title, she is "evolving" at warp speed. Her writing, arranging and playing on this recording are stellar - this is the best jazz, the stuff that walks that sometimes fine line - never sounding over-arranged, never sounding aimless and chaotic. Some long stretches with no flute here - Anne also play ...

Jazziz (Hrayr Attarian)
Flutist and pianist Anne Drummond's third album as a leader, Revolving, is breezy, lyrical and quite enchanting. That's not to call it artistically lightweight or categorize it as easy listening. On the contrary, her pastel-colored compositions are like impressionistic paintings and sketcher depicting spaciousness with deceptively simple lines. A ...

Jazz Scan (Ric Bang)
Seattle-born Anne Drummond's first instrument wasn't a flute. It was a recorder: a first for many children because of the relative ease with which simple melodies can be played. Introduced in medieval times, the instrument remains quite popular today. As often is the case, the piano followed; that was her primary instrument when she entered New Yor ...

Long Play (Hungary) (Robert Ratajczak)
The pianist, pianist, composer and music teacher Anne Drummond has been active in New York concert life since 1997. She also performed in North America and Europe. In 2013, she released her album which is a mixture of various musical styles, referring equally to jazz and classical music. The album is lightweight and easy to assimilate, crafted ...