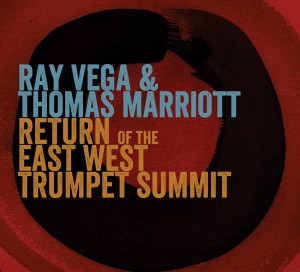 With a nod to the fabled trumpet duo sessions of Fats Navarro & Howard McGhee, and Freddie Hubbard & Woody Shaw, trumpeters Ray Vega and Thomas Marriott's fiery 2010 quintet release "East-West Trumpet Summit," hit #1 on the jazz charts and established the group through their festival and club appearances. Returning to the studio, the two are joined this time by George Colligan on Hammond B-3 Organ and again by drummer Matt Jorgensen as they explore a collection of originals, standards and jazz classics. Included are Wayne Shorter's "United," "Totem Pole" by Lee Morgan, and for the opener they borrow Curtis Fuller's "The Egyptian," also the lead off to Art Blakey's 1966 classic, "Indestructible."

Reviews of Return of the East-West Trumpet Summit

All About Jazz (Dan McClenaghan)
Seattle-based trumpeter Thomas Marriott plays well with electricity. Specifically, with the Hammond B3 organ. The most memorable of his now nine CDs on Origin Records feature either the Hammond B3 or some serious Moog synthesizer/Fender Rhodes work: Crazy: The Music of Willie Nelson (2007), with Ryan Burns on electric keys; Human Spirit (2009), fea ...

Midwest Review (Chris Spector)
It worked before and it works even better again. Right in the pocket of all the great trumpet duos of the past, this is a high octane outing in which the fire never runs out. Smoking and hard charging throughout, it's amazing how much of a joyous racket so few cats can stir up when they stir it up together. Hot stuff. ...

Jazz Weekly (George W. Harris)
Ray Vega and Thomas Marriott make up a two pronged battering ram as they bring their trumpets to the front line along with a soulful rhythm team of George Colligan/B3 and Matt Jorgenson/dr. Jorgenson lays down the groove for some hard bopping blowers such as "The Egyptian" and the ride cymbal snapping "United" that includes staccato hand claps to k ...

Earshot Jazz (Andrew Luthringer)
Ray Vega and Thomas Marriott made a splash in 2010 with the first edition of their East West Trumpet Summit, which went to #1 on the jazz charts on the strength of their interplay and rapport as they tore through a varied program of classic hard-bop sounds. The release of the second edition, Return of the East West Trumpet Summit is a welcome retur ...

JazzTimes (Travis Rogers, Jr.)
With the astounding success of their 2010 release East-West Trumpet Summit, Ray Vega and Thomas Marriott are at it again with Return of the East-West Trumpet Summit (Origin 82707). It recalls the great duets like Freddie Hubbard and Woody Shaw and it is with that honor to history that Vega and Marriott embark on this adventure that is loaded with g ...

Latin Jazz Network (Raul DaGama)
Frank Foster, in his autobiography tells of the time when he was invited on stage to play, at a time when he thought he was the bee's knees. He soon found out that Gene Ammons was also on stage with him and it didn't take Foster to find out who the real ‘boss' was. That ‘cutting' contest taught him a real lesson, not only in humility, but also ...

Improvijazzation (Dick Metcalf)
Thomas is among the best trumpeters on the jazz scene today – no doubt about that… I reviewed him in issue # 152, and was impressed enough to give him very high ratings; on this new outing (January, 2016), he's added B-3 organist George Colligan, and that organ makes all the difference in the world for this keyboard player… you'll also hear t ...