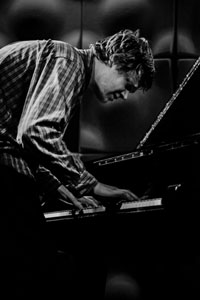 [Marshall] brings together a great heritage of the past, but also something very fresh and new.
- Jamie Cullum

After studying classical piano for 10 years under the tuition of his father, Dominic was awarded the Alan Hawkshaw scholarship to study jazz at Leeds College of Music. In early 2010 one of his original compositions 'Counting Pennies' was broadcast on BBC Radio 3's Jazz Line-Up, and in summer he went on to win the prestigious LCM Piano Prize.

After being accepted on to the Masters course at Conservatorium van Amsterdam in autumn of the same year, DJM worked on developing his compositional output and studying the traditional jazz idiom more closely. He was also lucky enough to receive guidance from the likes of Kurt Rosenwinkel, Aaron Parks, Dave Douglas, Gerald Clayton, John Riley, Dick Oatts, Brad Mehldau and Ambrose Akinmusire.