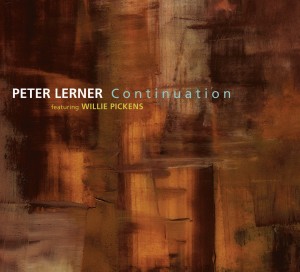 Midwest Record (Chris Spector)
How about some real Chicago jazz? Ace guitar man Lerner spent two years whipping this crew into shape so her could craft a band date tipping the cap to his mentor, piano man Willie Pickens, who is part of the band. It's fully Chicago jazz with a modern edge played by a crew that's really on board. Mostly originals with Miles nephew at the whee ...

All About Jazz (Jack Bowers)
Nothing unflattering can be said about Chicago-born and -based guitarist Peter Lerner's latest album, Continuation. The energy level is high, the charts admirable, the supporting cast exemplary. On the other hand, it would be hard to separate the enterprise from a veritable sea of rivals that dwell in a comparable groove. As there is nothing expli ...

Chicago Tribune (Howard Reich)
Guitarist Peter Lerner hasn't reached Broom's level of recognition, but he surely has outdone himself with his newest release, Continuation (Origin Records). Though he sounds strong in solo passages, it's the band he leads and the strength of his compositions that make the deepest impression here. With pianist Willie Pickens playing a leonine ro ...

Chicago Jazz Magazine (Tessa D\'Agosta)
With his latest record Continuation, multi-talented guitarist Peter Lerner continues to make a case for himself as Chicago's very own jazz authority. The nine-track, nearly 80-minute record showcases his creative versatility as a composer, arranger, and performer. Lerner manages to season each track with a different flavor--from Latin to blues to ...

Jazz Scan (Ric Bang)
Technology has impacted jazz in a particularly nifty way, by allowing artists and groups to produce their own music with considerable ease. They no longer have to sell themselves to record producers, in order to make their efforts available to the buying public; they can record, manufacture and distribute their own music. As a result, we're increas ...