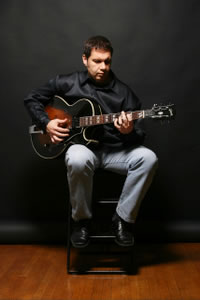 Peter Lerner is "one of Chicago's finest guitarists, a player with great technique and an equal amount of taste, soul and versatility (Chicago Tribune's METROMIX)." He has performed with such jazz luminaries as Ramsey Lewis, Lee Konitz and Willie Pickens among many others, performed at South Shore Jazz Festival, Sarasota Jazz Festival, Downbeat Jazz Museum, featured at the Iridium, the Jazz Showcase, the Green Mill, Andy's Jazz Club, just to name a few. Lerner's 2011 release, "Cry for Peace," featuring a stellar lineup including Eric Alexander, Victor Lewis, Jim Rotondi, David Hazeltine, Jerry Dodgion, Steve Davis among others, hit #25 in the national jazz album chart and has garnered critical acclaim. The recording was made at Van Gelder's Studio, and the album was produced by Grammy Award winner, Don Sickler.

Lerner was born and raised in the multi-cultural, musically diverse Hyde Park area of Chicago. He earned his Bachelor's Degree in Music from Chicago's American Conservatory of Music in 1983, and has been working as a professional musician, composer and recording artist ever since. It's Lerner's multi-faceted talent that makes him in demand: he has recorded numerous television shows and commercials, including the Oprah Winfrey Show. As a versatile guitarist, he performed with Gladys Knight, Funk icon Bootsy Collins, Charlie Wilson of the Gap Band, The Fifth Dimension, Patti LaBella and blues harpist Sugar Blue among others. He is also a faculty member at Columbia College of Chicago, where he has taught jazz guitar and improvisation since 1995, raising the next generation of musicians.