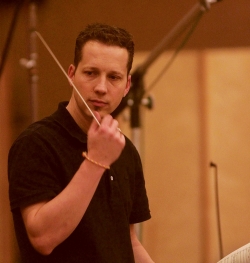 His credits include upcoming Hallmark movie "The Last Cowboy", OSCAR nominated "Schtonk", Gene Wilder's A&E movie "The Lady in Question", and the CBS mini series "Blonde", and other TV movies for ABC and CBS. Chris has been musical director on many TV shows and series, and has recorded more than 60 CDs.

Chris Walden started writing big band arrangements at the age of 16 for local high school bands. After graduating at 19 he joined the German National Youth Jazz Orchestra as a trumpet player. At the age of 21 he started writing arrangements for German radio big bands and radio symphony orchestras, while he was studying composition and arranging at the University of Cologne at the same time.

After getting his Masters degree Chris Walden conducted the RIAS Big Band in Berlin and the Frankfurt Radio Big Band, served as musical director for the televised German Movie Award Show for four years and started composing for films and scored about 20 German films and wrote 400 arrangements for big band and symphony orchestra before he emigrated to Los Angeles at the age of 29.

Chris has won the "Ernst-Fischer-Prize" twice for best orchestral composition in Germany.

Since 1999 Chris is leading his own big band recruited from top studio musicians based in Los Angeles. Chris is a board member of ASMAC (American Society of Music Arrangers and Composers.)