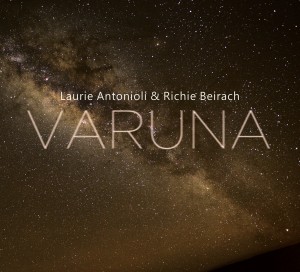 The delicacies created by (Beirach and Antonioli) are simply extraordinary.
Stereoplay Magazine

The themes of the night and dreams, the sky, the air and the wind, as well as love and beauty, provoke another intimate series of conversations between two unique voices. "Varuna" features three never-released Beirach originals, with lyrics by Antonioli, a Scriabin prelude, several songs from the Great American songbook, as well as a suite of free improvisations. Richie Beirach has carved an important place in jazz history with his classically infused modern harmonic approach to the piano, and Laurie Antonioli's entirely unique & creative vocal approach fuses with Beirach to create a highly personal artistic statement. Of their 2005 recording, "The Duo Sessions," Concerto Magazine stated, "The quality of this record is almost unrivaled, and if we were to hear something better we'd have heard the new Ella."

All About Jazz (C. Michael Bailey)
4 1/2 STARS There is a tuneful Constellation in the West and her name is Laurie Antonioli. Returning to her native Bay Area in 2006 after an expatriate period in Europe, where she served as professor of voice at Austria's Kug University, she formed her "American Dreams" band recording, most recently, the critically well-received albums, America ...

Midwest Record (Chris Spector)
Sometimes you just have to wait until things are right. Antonioli has been working with Beirach for over 25 years, mostly on his stomping grounds in Germany when she was based over there. This set was begun 10 years ago and was only finished up recently, and it's just the two of them for most of the set. Even when tackling the chestnuts, Antonio ...

Jazz History Online (Thomas Cunniffe)
Varuna is a dwarf planet located near Pluto, and although it was only discovered about fifteen years ago, it has already become the subject of an original song by vocalist Laurie Antonioli and pianist Richie Beirach. The lyrics touch upon the mythological and astronomical meanings of both the planet and its namesake, and the song's mystical, out-of ...

AXS (Carol Banks Weber)
Very rarely lately does the album artwork match the music waiting for the right listener to unlock a whirlwind of emotions. Here on Laurie Antonioli and Richie Beirach's vocal-piano duo album, they do as the pair invites listeners to sit in on their celestial conversation set to stun. Bay Area jazz singer Laurie Antonioli is not a strong vocalis ...

All About Jazz (Dan Bilawsky)
This absorbing release - an album that's something of a sequel to The Duo Sessions (Nabel Records, 2005) - finds vocalist Laurie Antonioli and pianist Richie Beirach painting one divine musical tableau after another. There are vivid numbers that place Antonioli's seraphic vocals atop Beirach's dense and full-flavored chords, spare readings that ...

JazzdaGama (Raul da Gama)
Underpinning so much of Laurie Antonioli's approach to music is identifying the provenance and essence of dramatic character, ‘mutant opera' if you will, which are not enacted but depend on perceptive rhetorical judgement within a fabric of rolling continuity. Her music may pay homage to forebears in scale, tone and technique but each one, especi ...

JazzTimes (Christopher Loudon)
Perhaps least known among contemporary jazz's great voice-piano duos, with 25 years of shared history, Laurie Antonioli and Richie Beirach are also masters of delayed gratification. The Duo Sessions, their first album as coleaders, was recorded in 1992 but not released until 13 years later. This overdue reunion was recorded in Beirach's adopted h ...

Jazz Weekly (George W. Harris)
Intimate interaction takes place between vocalist Laurie Antonioli and pianist Richie Beirach during this (mostly) duet session. Bassist Pepe Berns shows up for a sensitive read of "Gentle Rain" and a three part "Resolution Suite" but for the most part you get voice and ivories searching various dynamics and rhythms. Sometimes Antonioli whispers an ...

Jazz & Blues (Bill Wahl)
I first became aware of Richie Beirach back in the seventies through his work on ECM Records, especially his solo piano album "Hubris," which is just as captivating today as it was almost 40 years ago. He's had quite an impressive catalog of recordings since that time, as is evidenced with this new collaboration with Laurie Antonioli. Although I ...

Daily Democrat News (Sacramento) (Andrew Gilbert)
Best of 2015: Bay Area Jazz - Laurie Antonioli leads one of the better bands in the Bay Area, but for her gorgeous album "Varuna" (Origin), she reunites with the great American pianist Richie Beirach (who's been based in Germany since 2000). They're joined by bassist Pepe Berns on four of the album's 13 tracks, but working as a duo they spin g ...

Gapplegate Music Review (Grego Applegate Edwards)
Jazz vocalist Laurie Antonioli seems perfectly matched with the piano subtleties of Richie Beirach in their album Varuna (Origin 82698). Laurie has a superbly vibrant vocal instrument that she puts to beautiful use on this set. Phrasing, tone, pitch control and artistry are out front in the best ways here. Richie Beirach has not been in my ears muc ...