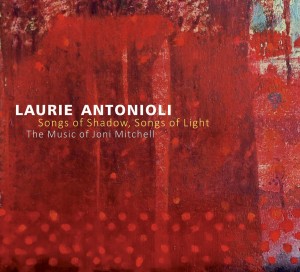 Antonioli catches Mitchell's phrases and phrasing as if from thin air, exhaling them as warm, autumnal bursts of memory. I will not hear a better recording this year.
- C. Michael Bailey, All About Jazz

With her latest project, Bay-area vocalist Antonioli plumbs new emotional depths exploring her earliest musical inspiration, the vividly confessional songs of Joni Mitchell. An internationally acclaimed jazz singer and influential educator, Antonioli doesn't just interpret Mitchell's music, she unveils unexpected emotional insights and uncovers submerged musical ideas while turning each song into her own revelatory tale. "Antonioli undertakes a rite of passage for a vocalist, emerging almost heroic by the end of it all. As a vocalist, Antonioli displays the spark that always flies when Joni Mitchell takes to song." - All About Jazz.

Reviews of Songs of Shadow, Songs of Light

Critical Jazz (Brent Black)
An inspired recording of tremendous passion and depth that takes the Joni Mitchell road less traveled. The immediate success of Songs of Shadow, Songs of Light could be linked to the less than predictable greatest hits collection other contemporaries are quick to offer up. Antonioli's band is first rate, A-list players such as bassist John Shiffle ...

Girl Singers.org (Doug Boynton)
Subtitled “The Music of Joni Mitchell,” right out of the box, you know it’s going to be a little bit of a tightrope act. It’s not like “The Music of Cole Porter,” or “Johnny Mercer;” songs that have been done a bazillion times, and no one (in my demographic, anyway) can remember exactly who did the original. On these, there’s n ...

Jazz Times (Christopher Loudon)
As is common knowledge among even casual Joni Mitchell fans, around the mid-1970s her passion for jazz became increasingly integral to her work; that passion escalated through the '80s and included collaborations with Mingus, Jaco, Wayne Shorter and Herbie Hancock. So, at first blush, it seems odd that as jazz-savvy a vocalist as Laurie Antonioli w ...

All About Jazz (C. Michael Bailey)
Bay Area vocalist Laurie Antonioli has been performing and recording for more than 30 years. Early on she mixed paints with the likes of Joe Henderson, Mark Murphy and Pony Poindexter with whom she undertook an 8-month European junket in 1980, quickening her already impressive jazz chops. Antonioli's discography is a slim yet intense affair that i ...

Jazz da Gama (Raul da Gama)
Attempting to play the repertoire of Thelonious Monk or Herbie Nichols is notoriously difficult. Here is the conundrum: Unless the music is recreated, while staying true to the original; made wholly new, there is a tendency to copy style and content. And then the attempt falls flat with mediocrity. There is that small matter of the stylistic idiosy ...

Amazon.com (Dr. Debra Jan Bibel )
Joni Mitchell certainly has gone far since June 1968 when I listened to the then emerging composer sing at New York's The Bitter End. Having become one of the honored greats of music, her numerous songs have been covered by many singers and instrumentalists. This includes jazz artists, which is appropriate since Mitchell herself wrote and performe ...

Jazz Weekly (George W. Harris)
It seems the jazz world has finally made Joni Mitchell an official member of the jazz composers canon. Vocalist Laurie Antonioli is the latest to delve into the rich songbook of the contemporary icon. Her voice has a hint of Mitchell’s ironic folksiness, but with a dash of a harder edge. She teams up with the intriguing mix of reeds supplied by S ...

San Jose Mercury News (Paul Freeman)
Effectively interpreting the songs of Joni Mitchell is a great challenge. Bay Area native Laurie Antonioli is more than up to the task. After starting out in the singer-songwriter-vein, she became an accomplished jazz singer. Now Antonioli triumphantly returns to her roots for this gorgeous exploration of Mitchell's fascinatingly complex songs. An ...

JazzWax (Marc Myers)
Singer Laurie Antonioli avoids the mistake of trying to duplicate Joni's originals and instead gives the material a big jazz twist. Backed by a highly sensitive and carefully arranged quintet that includes jazz pianist Matt Clark, Antonioli delivers a fascinating Both Sides Now that turns the original inside out. All of the tracks here convert Jon ...

KQED Arts (Andrew Gilbert)
The Golden State of Jazz: Top California Jazz Releases of 2014 Several of Joni Mitchell’s songs are firmly established in the jazz repertoire, but no singer before Bay Area veteran Laurie Antonioli has wrought as fine a balance between the original sources and her own vivid emotional and improvisational palette. It’s a journey that wouldn’t ...