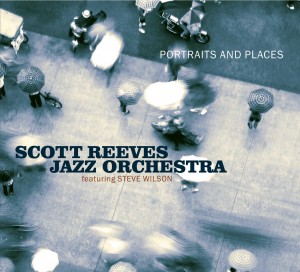 Scott Reeves has crafted a masterpiece for a debut album...The music is exciting, even thrilling, and this is why we like big bands in the first place.
- JazzTimes

Although New York City composer, trombonist & alto flugelhornist Scott Reeves has been writing for decades for groups such as the BMI Jazz Composers Workshop, the Dave Liebman Big Band, and groups in Japan and Italy, this is the debut recording with his own big band. Founded in 2008 and featuring top jazz artists, including saxophonists Steve Wilson & Tim Armacost, Reeves' writing draws on modern harmonic concepts, a judicious use of dissonance, wide-ranging forms, along with down home unabashed swinging. His compositions have been described by All About Jazz as "restless, full of color," and from Zan Stewart of the New Jersey Star Ledger, "His music mirrors his aesthetic philosophy, which is also deep and reflective."

Reviews of Portraits and Places

Midwest Review (Chris Spector)
A flugelhorn player that has earned his spurs as an arranger and conductor while laboring in the vineyards for a long time for cats as disparate as Dave Liebman and Bob Brookmeyer, he knows his jazz and thanks those long gone for the music that inspired him as well as those still around that taught him. Not nearly a kid and playing like an adult, ...

All About Jazz (Jack Bowers)
Scott Reeves formed his splendid New York-based orchestra eight years ago, in 2008, and while Portraits and Places marks its recorded debut, Reeves spent a number of years before that sharpening his composing and arranging skills at the highly regarded BMI Jazz Composers Workshop where he received tutelage and counsel from Manny Albam, Mike Abene, ...

JazzTimes (Travis Rogers, Jr.)
Scott Reeves has written and recorded for the hottest big bands and has taught at the finest Jazz schools including Julliard and, currently, at the City University of New York (CUNY). His textbooks on Jazz improvisation are required reading everywhere. After assembling his own 16-piece Big Band in 2008, he has finally released his debut album, Port ...

Jazz Weekly (George W. Harris)
Alto flugelhorn player and conductor Scott Reeves leads a sophisticated big band through an intelligent collection of originals. the 17 piece band includes all star Steve Wilson" who shines his soprano with a voice and dialogue on the gliding strut of "Osaka June" while his alto is included in the three movement "L & T Suite" during the bopping "W ...

Jazz Scan (Ric Bang)
Great jazz orchestras are harder to find these days than the proverbial hen's tooth. The general public no longer desires to hear the music that made the Big Band years so fantastic, and established talents such as Count Basie, Benny Goodman, Woody Herman, Gene Krupa, Tommy and Jimmy Dorsey, Stan Kenton and so many others. Groups like those are no ...

Music Archives (Carmel DeSoto)
New York based composer, arranger and trombonist/alto flugelhornist, Scott Reeves formed his impressive orchestra in 2008, and while Portraits and Places marks its recorded debut, Reeves spent a number of years before that sharpening his composing and arranging skills at the highly regarded BMI Jazz Composers Workshop where he received guidance and ...

NEW YORK MUSIC DAILY (Editor)
Big band jazz composers may be the most pure artists in all of music. These people do what they do strictly out of love. When you're done paying the band - if in fact there IS anything to pay the band with- there is absolutely no money in writing original big band jazz. Even the universally respected Maria Schneider survives on Chamber Music Ameri ...

BlogCritics (Susan Francis)
Displaying the glitter of big band music and the fast-paced rhythms of swing, the Scott Reeves Jazz Orchestra has the ingredients for creating party bashes done with class and pizzazz on their recording, Portraits and Places. The big sound emanating from the fleet of horns is intensifying, making the music jump out of its listening apparatus. The ...

Step Tempest (Richard B. Kamins)
Scott Reeves, composer, arranger, flugelhorn and trombone player, is a Professor of Music on the faculty of the City College of New York. He's also worked with the big bands of Dave Liebman, Chico O'Farrill, Oliver Lake, and Bill Mobley. He has released four albums as a leader, all with ensembles of seven or less. "Portraits and Places" (Origi ...

Audiophile Audition (Doug Simpson)
There's inspired music coursing through the debut album by the Scott Reeves Jazz Orchestra. During the hour-long Portraits and Places, Reeves shows many inspirations, from pianist James Williams (his résumé includes stints with Art Blakey and Clark Terry as well as jazz education) to composers such as Aaron Copland and Leonard Bernstein. Through ...

Jazz Weekly (George W. Harris)
Scott Reeves conducts an impressive big band and even plays his flugelhorn on this collection of original compositions. The music is varied and intelligent, with a modal 6/8 "The Soulful Mr. Williams" including the leader soloing through the blues. The horn sections sizzle, snap and pop, swaggering on "Last Call" and bopping through "3 ‘n 2" alon ...

Improvisation Nation (Rotcod Zzaj)
Wow! Players keep "coming back", now that I've been at this for a good while (I first reviewed Scott's work in a quintet setting, way back in issue 89). This March 2016 release is his first recording as a jazz big band leader, and he nails it, no doubt! Just listen to the lovely "Aquas de Marco" to hear how powerful Scott's conducting, arranging ...

Jazziz (Staff)
Multi-instrumentalist, composer and educator Scott Reeves assembled his Jazz Orchestra eight years ago, but has just gotten around to recording with them. During that time, the City College of New York professor, who also taught at Juilliard among other prestigious institutions, has honed his big band's sound and the works he's written for them. Th ...

International Trombone Association Journal (Brian Keegan)
Portraits and Places is a big band record highlighting the writing and playing talents of Scott Reeves, and additionally Steve Wilson on woodwinds. While not specifically a "trombone album," Portraits and Places showcases some great playing from trombonists Matt McDonald and Max Seigel, and of course Scott Reeves himself. The album starts out wi ...

Music Man Blog (Rob Nicosia)
Scott Reeves is a Trombonist, Alto Flugelhornist, Composer and Educator. He has performed and recordered with some of the best Jazz Big Bands playing today like the Dave Liebman Big Band, Bill Mobley's Smoke Big Band, The Oliver Lake Big Band and the Chico O'Farrill Afro-Cuban Jazz Orchestra. In addition to all his fine performing, Scott is Profes ...