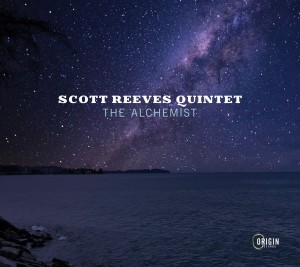 Having spent the last decade focused on compositions and recordings for his Jazz Orchestra, Scott Reeves took some time during the pandemic to revisit unreleased recordings from his quintet, which put out several albums during the 2000s. Discovering this set recorded live at Harlem's City College of New York in 2005, Reeves re-experienced the palpable chemistry and magic of the night as the band was connecting in a deeply musical place. He had been experimenting with electronic enhancements to his alto flugelhorn and alto valve trombone at the time. In combination with Russ Spiegel's electric guitar on the melodies, and alongside Mike Holober's piano and Fender Rhodes orchestrations, they uncovered a border between the warmth of more traditional forms of jazz and the edginess of more experimental explorations. The quintet is rounded out by veteran New York musicians, bassist Howard Britz and drummer Andy Watson.

All compositions by Scott Reeves published by Reebone Music, BMI, except: "All or Nothing at All," Arthur Altman & Jack Lawrence, published by Range Road Music, Inc.)

Reviews of The Alchemist

Paris Move (Thierry Docmac)
This is an album that could be described as a "document", reflecting a brilliant performance produced in 2005 by the masterful Scott Reeves Quintet, with Russ Spiegel, Mike Holober, Howard Britz, Andy Watson, and Scott Reeves on Alto Bugle, Piston Alto Trombone and Electronics. This is a new concert by the Scott Reeves Quintet, particularly sophist ...

Lucid Culture, NYC (Delarue)
Scott Reeves got his start as a trombonist, has played a lot of big band gigs over the years and became a fearsomely good composer of jazz for large ensembles. He's put out two big band albums and both are excellent. He also has a thing for unorthodox instruments: these days, his two main axes are the alto flugelhorn and the even rarer alto valve t ...

Patch (Editor)
Reeves, who has performed with the Vanguard Orchestra and Chico O'Farrill's Afro-Cuban Jazz Orchestra, as well as with artists including Steve Wilson, Kenny Werner, James Williams, Rich Perry, Bill Mobley, and John Patitucci, expected to have time on his hands upon his retiring from teaching at institutions including the prestigious Juilliard Schoo ...

Musical Memoirs (Dee Dee McNeil)
This lost recording was originally performed ‘live' at the City College of New York in 2005, sixteen years ago. During the 2020 pandemic, when Scott Reeves had time on his hands, like thousands of other musicians, out of curiosity, Scott Reeves gave this long shelved project a listen. "I was excited to hear how the quintet played so well tog ...

All About Jazz (Jack Bowers)
Devastating as it has been, the global Covid-19 pandemic has produced a few upsides as well, one of which is the rediscovery by versatile Scott Reeves of a concert that his quintet performed sixteen years ago, in May 2005, at the City College of New York. With time on his hands as a result of the scarcity of gigs during the pandemic, Reeves visited ...

Step Tempest (Richard B Kamins)
Many musicians used the pandemic to create new work, to hone new skills, and to find new ways to express themselves in a most uncomfortable. It's possible Scott Reeves (valve trombone, alto flugelhorn, electronics) did all those things but he also went through his archives. When he did, Reeves listened with fresh ears to a 2005 live gig he recorde ...

Jazz Weekly (George W Harris)
Scott Reeves plays the more unorthodox alto valve trombone, alto flugelhorn and adds electronics to his post bop team of Russ Spiegel/g, Mike Holober/p, Howard Britz/b and Andy Watson/dr. Except for the rocking version of "All Or Nothing At All" the tunes are from the leader's pen, with the horns and pulse creating tones similar to Herbie Hancock's ...

Rockerilla (Italy) (Elio Bussolino )
The "alchemist" in question is Miles Davis and it was not necessary for the trombone and alto flugelhorn virtuoso Scott Reeves to let this "revelation" escape to imagine it ... Surprising album, this one by the Chicago musician and bandleader who soon joined the activity of performer to that of teacher at some of the most renowned North American ...

Jazz Views (UK) (Euan Dixon)
Readers in the UK may not be familiar with the work of Scott Reeves. Indeed, until I received a copy of this intriguing recording he was an unknown quantity as far as I was concerned. Let me tell you that it turns out he is an esteemed scholar/performer recently retired from full time academic work and active on the New York scene where he performs ...

All About Jazz (Edward Blanco)
Trombonist, composer and band leader Scott Reeves once performed a live concert at the City College of New York with his then quintet, which has now been documented as his newest offering entitled The Alchemist. However, new is not the operative word here, as this musical event took place on May 5th, 2005. While concentrating on compositions and re ...