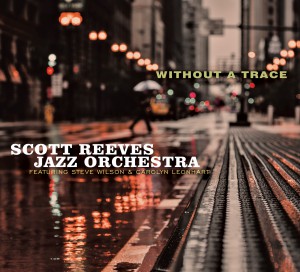 Scott Reeves has crafted a masterpiece...The music is exciting, even thrilling...
JAZZTIMES

New York composer, trombonist & alto flugelhornist Scott Reeves' Jazz Orchestra has been hard at work since 2008, but it was only in 2016 with the release of the group's debut recording, Portraits and Places, that a wider audience was offered a peek at Reeves' broad and sophisticated talents. With outstanding New York musicians, including saxophonists Steve Wilson and Tim Armacost, pianist Jim Ridl and vocalist Carolyn Leonhart, Scott's music offers an inspired approach to big band writing, combining a contemporary harmonic palette and non-traditional forms with infectious, swinging grooves and great soloing by world-class jazz artists. Without a Trace features arrangements of standards such as Kurt Weill's "Speak Low," and "All or Nothing At All," along with Wayne Shorter's "Juju", and then four Reeves originals, including "Something for Thad," a tribute to the great Thad Jones.

"...a keen ear for melody, harmony and counterpoint...his compositions are sophisticated yet accessible, his arrangements scrupulously burnished and invariably engaging." - All About Jazz

Reviews of Without a Trace

Midwest Record (Chris Spector)
Reeves makes his mark early with the opening track giving "Speak Low" a Latin edge that let's you know he rounded up the gang for some hot playing and creative moves. Whether original or cover, leading or playing, Reeves is the man with the plan. Tasty, straight up jazz by a crew that loves to play it right and tight, this is a killer date througho ...

Musical Memoirs (Dee Dee McNeil )
This winter, a plethora of big band and orchestra CDs have crossed my desk. The Scott Reeves Jazz Orchestra is another very fine example of precision arrangements and excellent musicianship in pursuance of jazz orchestration. From the first Latin strains of cut #1, "Speak Low," I was captivated. This familiar jazz standard features alto saxophonist ...

All About Jazz (Edward Blanco)
4 1/2 - STARS The Scott Reeves Jazz Orchestra follows up the highly successful debut album Portraits and Places (Origin, 2016), with another masterpiece recording on Without A Trace offering new and exciting arrangements of three standards and four creative Reeves originals that all together, pack quite a powerful musical punch. A full-tenured pro ...

New York City Jazz Record (Scott Yanow)
A fine trombonist and alto flugelhornist, Scott Reeves has led small groups but it is with big bands that he really excels. He first recorded with the Indiana University Jazz Ensemble in 1969 but more significant have been his recorded arrangements and solos with orchestras led by Dave Liebman, Michael Treni and Bill Mobley. His own orchestra's deb ...

JazzdaGama (Raul da Gama)
The Scott Reeves Jazz Orchestra isn't going anywhere – clearly not anytime soon, anyway. If anything far from vanishing Without A Trace suggests that with this music so vibrantly coloured and sublimely textured, and well-judged too, this jazz orchestra is swinging its way into the world of large ensembles, continuing to occupy the top tier with y ...

Jazz Weekly (George W. Harris)
Fresh big band charts and deliveries are produced by composer/conductor Scott Reeves as he leads a team that includes all stars Steve Wilson/ss-as-fl and Carolyn Leonhart/voc. The vocalist is featured on a lithe and brassy title track, as Wilson gives an aria alongside Jim Ridi's somber musings on "Incandescence." Reeves shows cleverness as he char ...

Aquarian Weekly (Mike Greenblatt)
Like the legendary Gil Evans [1912-1988] who more than anybody helped Miles Davis become a super-duper star by outfitting the trumpeter with his celestial arrangements, the music of Scott Reeves goes through the kind of changes wherein it starts off as one animal buts ends up another. Without A Trace (Origin Records) by The Scott Reeves Jazz Orches ...

All About Jazz (Jack Bowers)
Grudging good wishes to New Yorkers who are able to see and hear the world-class Scott Reeves Jazz Orchestra on a fairly regular basis. Everyone else must make do with the occasional recording (Without a Trace is only the second by the ten-year-old ensemble which made its debut in 2008). That's not nearly enough, of course, but on the other hand, b ...

London Jazz News (Nigel Waddington)
New York Big Band leader and composer Scott Reeves is someone whose music I wish I'd discovered sooner. His new release, Without A Trace, contains originals and standards, colourfully orchestrated and recorded with an intimate, club-like ambience. These pieces really are "composed", and what a difference it makes. They are led by the line, so th ...

Downbeat Magazine (Suzanne Lorge)
REEVES' BIG BAND BALANCE IT WASN'T UNTIL TROMBONIST/ALTO flugelhornist Scott Reeves moved to New York City in 1999 that he began to compose and arrange at the level he'd always envisioned. "I'm either a late bloomer or a slow learner," he joked after the May 12 release concert for Without A Trace (Origin), his second big band album, at Smalls. O ...

Jazziz (Brian Zimmerman)
In addition to being an in-demand trombonist and professor at the City College of New York, Scott Reeves is an abundantly skilled composer and arranger, with a reputation for merging edgy, non-traditional harmonies with timeless grooves and forms. Without a Trace, his sophomore album for Seattle-based Origin Records, provides a glimpse into Reeve's ...

New York Music Daily (Delarue)
The rain-slicked streetcorner tableau on the album cover of the Scott Reeves Jazz Orchestra's latest release Without a Trace – streaming at Bandcamp – Is truth in advertising. In recent years the group have taken a turn into moody, brassy latin-inspired sounds, something they excel at. They're at Dizzy's Club on Sept 3, with sets at 7:30 and 9: ...