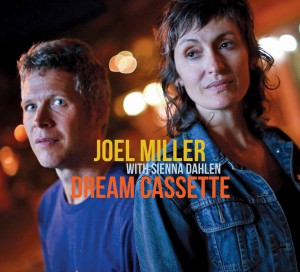 This could be a rock record...the songs and moods draw from the '80s music and pop culture in general that Miller reveres to this day. It could most certainly be called a jazz record...the playing is superb and the arrangements are stellar. Somehow, Miller blends all of this into something cohesive and rewarding, especially with repeated listeners. So is it partly rock? Is it purely jazz? Let's just say it's great.
Mark Rheaume, CBC Radio

Following up on his Juno Award-winning 2013 quartet recording, "Swim," Montreal saxophonist Joel Miller teams up with vocalist and lyricist Sienna Dahlen for "Dream Cassette," where they pursue their own vision of what a "pop" album can be. Inspired by the melodic simplicity and emotional depth of American folk music, Miller marries his flawless technique and boundless sense of musical adventure with a desire for his music to connect with people. His free-spirited eclecticism has already been lauded by Downbeat magazine for "illustrating the cross-pollination emblematic of the Montreal jazz community," and by trumpeter Dave Douglas, calling Miller "a breath of fresh air and one of the great pleasures of the Montreal scene."

Midwest Review (Chris Spector)
Nothing like winning a Juno for jazz sax to make you change directions to keep from repeating your self. Teaming up with a lyricist, Miller turns his attention to left of center sunshine pop that manages to meld his interests into a heady brew that shows the apple might not have fallen far from the tree, but it has rolled away a bit. An engaging ...

Improvijazzation (Rotcod Zzaj)
I've only reviewed one other release from Joel, back in issue # 83; it got high marks, but this new one is absolutely STUNNING! Joel's high-energy, high-talent saxophone work against the haunting vocal work Sienna does brings to mind (strangely enough) some of the best "pop" albums that I grew up with… in fact, they say in the liner notes that t ...

CD Hotlist (Rick Anderson)
Rick's Pick This is a delightfully strange album from saxophonist/composer Joel Miller, one that will surely get filed in the Jazz section even though it won't sound anything like 99% of what you'll find there. on Dream Cassette he is collaborating with singer and lyricist Sienna Dahlen, and drawing on the relatively simple (sometimes nearly penta ...

WVIA Radio (George Graham)
Artists have been mixing rock and jazz for about 50 years now. Most of the time it takes either one of two forms - rock tunes with some added jazz instrumentation and stylistic touches, or music that comes basically from a jazz composing style with electric instrumentation. Examples from the early days include respectively, Blood Sweat & Tears, and ...

The Whole Note (Raul da Gama)
On Dream Cassette, Dahlen teams up with an extraordinarily gifted multi-instrumentalist and songwriter, Joel Miller who, in each of 12 original songs here, has tempered his arsenal of sophisticated compositional resources with fond and haunting reminiscences reflecting the contours of New Brunswick's rich and yet starkly dramatic cultural landscape ...

JazzdaGama (Raul da Gama)
The title of this recording is interesting in the whimsical images it conjures up, none more vivid than a journey back to musical traditions that are a molten mix of styles and cultures that can only come from a Canadian landscape. But more than anything else this is a product of the prodigiously talented musical polymath, Joel Miller. In each one ...