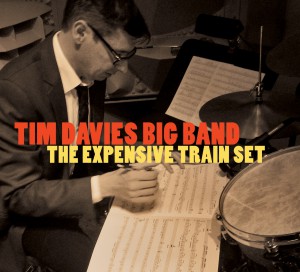 Grammy-nominated composer, arranger, drummer and band leader Tim Davies formed his first big band in 1998 in Melbourne, Australia. Its run was cut short by Tim's move to Los Angeles, but since 2000, Davies has released two recordings with his top­flight LA band of seasoned session and touring players. For The Expensive Train Set, Davies comes full-circle as he resurrects the Melbourne group and features both bands on four tunes each, with one new composition written for the two bands performing together. Davies creates arrangements grounded in the traditional, while adding elements from many influences to create a sound that is wide-ranging and cinematic, a sure consequence of his career as a major orchestrator and conductor for film, TV and events.

Reviews of The Expensive Train Set

Midwest Record (Chris Spector)
So much action coming from the back of the riser! The big band ace relocated from Austrialia to LA and this set finds him giving star time to aggregations he's led in the past in both places. There might be an easy familiarity to his work since he's one of the top hot shot TV and movie orchesrators these days and you've probably heard his work wi ...

Duluth Reader (John Ziegler)
The jazz big band is one of those dinosauric amalgamations that roamed the land in thundering herds back in the mid to late 20th Century. From Fletcher Henderson to Lionel Hampton, from Count Basie to Duke Ellington, from Woody Herman to the Thad Jones-Mel Lewis Orchestra, these large aggregations (usually 18 pieces) traveled up and down the hig ...

All About Jazz (Jack Bowers)
Tim Davies, who led a big band in his native Australia before relocating to Los Angeles in 2000, reprises that experience on parts of The Expensive Train Set, returning home to supervise his Melbourne ensemble on four selections, presiding over his Los Angeles-based band on four others, and somehow managing to blend the two groups together as one o ...

WTJU - Richmond (Dave Rogers)
Imagine being the leader of and composer/arranger for two big bands and you'll get the idea of this release. Both have identical instrumentation, though the only player common to both is Tim Davies (drums) himself. One band is in Melbourne and the other in Los Angeles and one song combines the two together. The sound is large and powerful and often ...

KUCI - Irvine, CA (Hobart Taylor)
Composer/arranger Davies's day job is Hollywood... film scores, arranging a symphonic performance of Kendrick Lamar's "To Pimp a Butterfly", etc. Here he gets to show his own capacity to write and arrange big band music as high art. Like the late '40's Kenton bands, or even more like say Sauter-Finegan, Davies explores the complex possibiliti ...

Downbeat (Michael Barris)
***1/2 Like the veteran Hollywood film and TV orchestrator he is, Tim Davies understands instinctively how to blend orchestral colors and textures to create moods, aligning himself with his hero, Nelson Riddle. Tonal and textural artistry abound on The Expensive Train Set, an ambitious endeavor that dwells largely in a meditative atmosphere with t ...

Jazz Weekly (George W. Harris)
Drummer Tim Davies leads two different bands here, one from Los Angeles, USA and the other from Melbourne, Australia, and they both swing with class. For the California band, the horn sections show lots of punch on "Minor Incidents" and the moody and richly textured title track as Brian Owen/tp and Jacques Voyemant/tb contribute rich solos. The Au ...

Jazz Scan (Ric Bang)
The world is full of terrific jazz drummers, but few are also great composers, arrangers, orchestrators and leaders. Tim Davies fits that bill, and he's also a Grammy Award winner. The Australian-born artist formed his first band in Melbourne in 1998, and moved to the United States shortly thereafter. From 2000 onward, his big bands have been stati ...