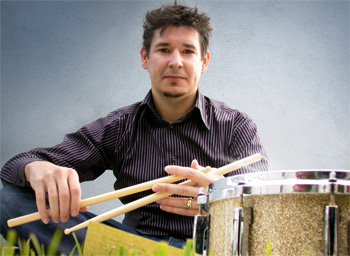 Ever since he was given a cassette of Australia's Daly Wilson Big Band at age 12, Tim Davies had the dream to write for and play drums in his own big band. That goal was realized in 1998 when he formed his first big band in Melbourne, Australia. Although it only had a short run before Davies moved to the States, the band made quite an impact. Since 2000 Davies has led a big band in Los Angeles featuring top session and touring players. The band's first record, Epic, was released in 2003 and a follow-up, Dialmentia, released on Origin in 2009 for which Davies garnered a Grammy nomination for Best Instrumental Composition for 'Counting to Infinity'. The newest album, The Expensive Train Set, will be released by Origin Records in September 2016. Grounded in the traditional, his music adds elements of rock, metal and hip hop, creating a blend that is truly unique.

When not writing for or leading the band, Davies has found his niche working as a composer, arranger, orchestrator, and conductor in Hollywood. More information is www.timusic.net