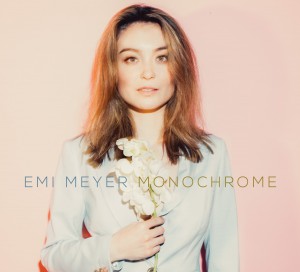 With an interesting blend of jazz, soul and pop, Tokyo-based singer/songwriter Emi Meyer has carved out a wide-ranging career in Japan with her songs featured in TV, movies and advertising, and her performances ranging from small jazz clubs to major stages throughout Asia. For her debut U.S. recording, Meyer combines music from a set recorded in Paris with Belgian pianist Eric Legnini's French quartet, and new originals recorded in Seattle and featuring guitarist Dan Balmer & pianist Dawn Clement. From her own compositions to classics like "I'd Rather Go Blind" from Etta James' songbook, Michael Buble's "Home," or "What A Wonderful World," Emi's intimate readings project poignancy and grace, tying them all together in an engaging package.

Midwest Record (Chris Spector)
A Seattle native that has managed to tear it up in Asia comes home to hang out with the crème of the Seattle jazz scene to turn out a set that makes you wonder if she's an art chick that can do whatever she wants because Paul Allen gets the first special thanks in the liner notes or is she a millennial Chris Connor. Today's lounge lizards can onl ...

KUCI - Irvine, CA (Hobart Taylor)
Emi Meyer's phrasing and nuanced tonal control is clean and complete. This is a singer/songwriter whose intimate and compelling narratives and reflections are set in jazz pop arrangements. The melodies fall like the first snow. Her tune "If I Think of You" and her co-written tunes, especially one with Dawn Clement, "Flesh and Bones", resonate with ...

Downbeat (Bobby Reed)
With her U.S. debut, Monochrome, singer-songwriter Emi Meyer has crafted a gem that will greatly expand her international fan base. Born in Kyoto to a Japanese mother and an American father, the Tokyo-based Meyer has released several albums in Japan, and her music has appeared on the soundtrack to Japanese director Nobuhiro Doi's film Flying Colors ...