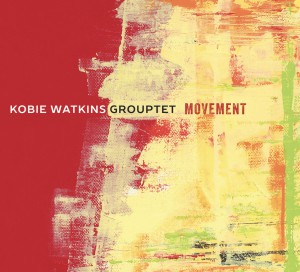 Known for his fiery, emotive drumming from the last decade of touring and recording with Sonny Rollins, Bobby Broom and Kurt Elling, Kobie Watkins was at the same time visualizing musical concepts for his own compositions and group. First explored on his 2009 solo debut, "Involved," Watkins' new formation was created from the inside out, born and cultivated from his travels and experiences and realized through his several year performing relationship with pianist Justin Nielson and his creatively connected bandmates. Though born and raised in Chicago and now based in North Carolina, the Grouptet was formed by happenstance in Idaho near the entrance to Yellowstone, where they were each brought in to teach. The remoteness allowed them to freely explore their own collective voice resulting in this collection of nine inspired originals, along with a slinky new arrangement of "Manteca."

Midwest Record (Chris Spector)
From Chicago and Sonny Rollins he came but now Watkins is based in North Carolina and finds himself kicking it out with a group that came together at the entrance of Yellowstone. Not wide open spaces music, this is solid, straight ahead jazz informed by chops well heated in the crucible of nightly playing with some other real hitters along the way ...

Michael's Jazz Blog (Michael Ferber)
Drummer Kobie Watkins, born and raised in Chicago, has toured and recorded with a number of well-known musicians like Sonny Rollins, Bobby Broom (he plays on the three Bobby Broom albums which I have in my collection), Kurt Elling, Branford Marsalis and Joe Lovano. He presents here his first album with his Grouptet. The Kobie Watkins Grouptet in ...

Modern Drummer (Jeff Potter)
A fiery sophomore release from a swinging force. Here's some heavy jazz cred: on his last tour (2012), tenor giant Sonny Rollins chose Kobie Watkins for the prestigious drum seat. That says it all, but in addition, the native Chicagoan drummer and educator also gigged with the likes of Kurt Elling, Branford Marsalis, Joe Lovano, and Arturo Sandova ...

UK Vibe (Alan Musson)
Kobie Watkins is another fine musician who is new to me. Listening to this album I'm not quite sure why he hasn't come to my attention before. Watkins is a native of Chicago, Illinois. Music has been in his blood from an early age when he listened to his father playing drums in the church. Over the years he has progressed to become an eminent drumm ...

Chicago Tribune (Howard Reich)
BEST OF 2018 Former Chicago drummer Watkins shows his deepening maturity with this release, a collection of vividly stated, often hard-charging originals featuring his muscular Grouptet. There's unstoppable rhythmic energy here at all tempos and unmistakable cohesion among its five players. As for the compositions, the lyric poetry of Watkins' "Si ...