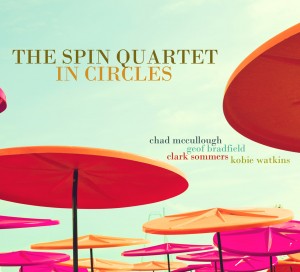 Four musicians with a long interconnected history, come together to weave their stories, intertwine their art and push forward in new directions. Saxophonist Geof Bradfield, trumpeter Chad McCullough, bassist Clark Sommers, and drummer Kobie Watkins are frequently called upon by some of the most revered names in music (Sonny Rollins, Kurt Elling, Randy Weston, Wayne Horvitz to name just a few), solidifying their place not just as side-men but as contributing artists. The collective spirit is apparent throughout the group's debut album as they take a free-wheeling approach on "Little Marionette," and "Camping Lantern," display a depth of mood and character on the pensive "Oranges...," or twist and turn through Bradfield's "You Will Look for Yours on Earth."

Reviews of In Circles

Midwest Record (Chris Spector)
A crew of hitters familiar to fans of the Origin label or contemporary jazz in general, they band together for their first as a band and their well wrought forward thinking tunes will have you on board in no time. Certainly sounding like it’s the right time and place for them to step out on their owns, this free-ish jazz is a gasser. High octa ...

Wondering Sound (Dave Sumner)
Nice modern set from the quartet of trumpeter Chad McCullough, tenor saxophonist Geof Bradfield, bassist Clark Sommers and drummer Kobie Watkins. The way in which McCullough and Bradfield harmonize, it gives the music a heavy presence, but when they go off on separate but related melodic trails, it provides the music a nifty sense of lift-off. ...

AXS (Carol Banks Weber )
Take a classically inclined, modern jazz technician in Seattle and put him together with some visiting superstar guest artists - his Chicago heroes. Makes for a can’t-miss series of Western Washington concerts this month, especially if the heroes in question are Kobie Watkins, Clark Sommers, and Geof Bradfield, the best in the business. Drumme ...

Jazz Weekly (George W. Harris)
The post bop quartet of Chad McCullough/tp-fh, Geof Bradfield/sax, Clark Sommers/b and Kobie Watkins/dr do some impressive work with clever and sophisticate originals. Without a piano as a safety net, the two horns weave in and out of unison like a high wire act, almost but never quite falling over as Sommers keeps things together on “Little Mari ...

Chicago Jazz Magazine (Paul Abella)
There's not a lot to know about The Spin Quartet, or their album, In Circles. There's no liner notes, and to tell the truth, I don't know much about leader and trumpeter Chad McCullough. I know that Clark Sommers has appeared on a few of my favorite local discs from the last few years. I know that Kobie Watkins is a beast behind the drums, and e ...

Chicago Reader (Peter Margasak)
Trumpeter Chad McCullough, the nominal leader of this gritty quartet, recorded their superb debut album, In Circles (Origin), in his old home of Seattle before settling here in Chicago (he now teaches at DePaul). But his powerful playing and no-nonsense compositions almost seem to telegraph his move to the Windy City. With performances built around ...

Cadence (Don Lerman)
The Spin Quartet consists of top-notch musicians who carve out an interesting group identity. The absence of a piano or guitar from the instrumentation of two horns, bass, and drums gives clarity and an open quality to the music, aided by the fine writing from mostly band members. Trumpeter/flugelhornist Chad McCullough wrote five of the pieces ...

Music Lounge - WDCB, Chicago (Paul Abella)
First up, Chicago's own Spin Quartet. They've got a new album out called In Circles (Origin Records). Led by Seattle transplant Chad McCullough, this is an all-star group, featuring Geof Bradfield on tenor sax, Clark Sommers on bass and Kobie Watkins on drums. This piano-less quartet can kick up a storm when it wants to (as on "You Will Look for ...

Cadence (Don Lerman)
The Spin Quartet consists of top-notch musicians who carve out an interesting group identity on In Circles. The absence of a piano or guitar from the instrumentation of two horns, bass, and drums gives clarity and an open quality to the music, aided by the fine writing from mostly band members. Trumpeter/flugelhornist Chad McCullough wrote five of ...

LEARN MORE ABOUT The Spin Quartet