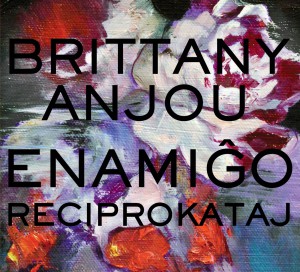 While we've barely opened the door to 2019, we already have a serious contender for the year's strongest debut here.
Dan Bilawsky, All About Jazz

Brittany Anjou has explored everything from Ahmad Jamal to Bikini Kill at the piano on three continents, between roiling original compositions inspired by Bartok, Stravinsky, Red Garland and McCoy Tyner. It makes great artistic sense that the title of her first major piano trio album and the five-part suite contained within is in Esperanto, the "constructed" international language. Just as Anjou's English-language title "Reciprocal Love" becomes Enamiĝo Reciprokataj (En-äh-mee-joh Reh-sih-pro-käh-tye), so too does the mainstream language of the piano jazz she loves get translated into something strikingly different and psychically original. Jazz fans will detect familiar influences in what Anjou calls her "inner trio dialogs" featuring bassist Greg Chudzik and drummer Nick Anderson. Anjou's songs, all originals, comment on the art of the trio even as they bask in its glories. With its minimalist repetitions, free-jazz-meets-Rachmaninoff flourishes and electronic framing, there's a trippy sense of expansiveness in the music. Her compositions are both dreamlike and bracingly wide-awake. Enamiĝo Reciprokataj (En-äh-mee-joh Reh-sih-pro-käh-tye) is the first of a trio of thematic language albums Anjou plans on releasing. "On a planet full of original musicians, Brittany stands out." -Take Five, Victoria, BC

JazzHalo (Belgium) (Georges Tonla Briquet)
Jazz (improvisation) and Esperanto are two equal entities with a universal character for the American pianist Brittany Anjou. Hence the CD title in Esperanto (mutual love). It is not surprising that her compositions contain characteristics from all over jazz history and that she constantly switches from one perspective to the other. Swing and bop t ...

Tracce di Jazz (Italy) (Nicola Barin)
Brittany Anjou: the virtuoso of the piano A mad and powerful pianist who makes us jump from the chair, that's who Brittany Anjou is. When you think that the trio plan has already been able to say almost everything, the talented Seattle artist surprises us. Her first trio album, Enamiĝo Reciprokataj , was released in February for the Origin Record ...

All About Jazz (Dan Bilawsky)
There's a fascinating disjunction shaping the work of pianist Brittany Anjou. In one bend of being, her endeavors reflect extreme faith in the concept of catholicity. As a student of Esperanto—the "universal language" devised by Dr. Ludwig Lazarus Zamenhof in the late 19th century—and a musician warmly embracing an ecumenical approach, open lin ...

New York City Jazz Record (Donald Elfman)
For pianist Brittany Anjou's new recording, she uses Esperanto for the title (translated as "Unrequited Love") as a symbol for the international language utilized to create her music. The not-quite-centerpiece of the recording is the five-part Reciprokataj Suite—not-quite because the sections are ‘interrupted' by other originals yet the albu ...

Hot House Jazz Guide (NYC) (Elzy Kolb)
Pianist Brittany Anjou divides her time between her Brooklyn home and a long-term gig in Kuwait, where she teaches jazz theory and more to kids and adults. "The students are hungry for jazz, and want to understand theory. Any time I travel and play abroad, people are really listening, it's like you're valued more there," she says. "In Kuwait, the p ...

Midwest Record (Chris Spector)
In which we find our fearless leader making a piano trio debut that goes somewhere else but really doesn't. Not willing to take on art for art's sake, this tyro that's sought out and studied with dyed in the wool pros shows that you don't need to microdose acid to expand your mind. Almost like taking the history of piano trio, putting it in a Yatze ...

Musically Speaking (Mel Minter)
When an improvising jazz musician relaxes the reins and lets the music go where it wants, the level of excitement can jump dramatically. Spitfire pianist/composer Brittany Anjou does just that on her new album, Enamiĝo Reciprokataj (pronounced en-äh-mee-joh reh-sih-pro-käh-tye and roughly translated from the Esperanto as either "reciprocal love" ...

Amazon (Debra Jan Bibel)
A Sophisticated Debut: New Terrority for Jazz Invention The title of this album, Enamigo Reciprokoataj, seems to be a gimisch of languages and in a way it is, being Esperanto. To my knowledge, it is second Esperanto-related musical recording; Lou Harrison's La Koro Sutro is the other. Brittany Anjou, pianist and trio leader, is the composer and ar ...

Downbeat (Philip Freeman)
Why did pianist Brittany Anjou title her album Enamigo Reciprokataj, which translates from Esperanto to "reciprocal love?" Even after giving it a listen, the answer's still unclear. Anjou's debut album, inspired by a Stravinsky ballet, is a strong, classicist piano-trio effort that nods to the work of Ahmad Jamal, Vince Guaraldi and even modern ...

Jazz Weekly (George W. Harris)
RINGER OF THE WEEK Here's a rewarding and exciting trio album by pianist/composer Brittany Anjoy. She works with a core team of Gregory Chudzik/b and Nicholas Anderson/dr on almost all of the tracks, and her composing skills are matched by her warm technique. The album is bookended by some electronic musings, with "Starlight" leading into an up ...

JazzTimes (Ken Micallef)
There's a wonderful sense of becoming, of exploration and playfulness on Minot, North Dakota-born pianist Brittany Anjou's debut recording. She crams so much talent and energy into the album's 10 songs that you wonder if she'll ever come up for air. Enamiĝo Reciprokataj (Esperanto for "reciprocal love") is the daring work of a 35-year-old visionar ...