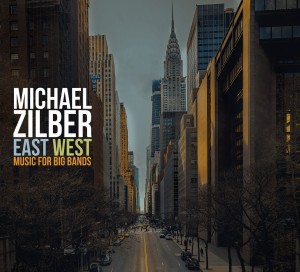 Put simply, Zilber is one of the true masters of modern jazz saxophone...his prodigious talents evidenced by his recordings and live performances are truth.
All About Jazz

Composer/Saxophonist Michael Zilber's musical approach has always been a unique mix, bred from myriad activities over the years in New York & Boston in the east, and Vancouver & San Francisco in the west. On East West, that aspect of his being is front and center, along with his delving into writing and arranging for big bands over the last decade. Tackling an ambitious, once-in-a-lifetime project with two big band recording sessions - one in New York, the other in San Francisco - Zilber gathers from his extended music community two groupings of powerful, empathetic musical voices, their collective commitment to support, share and create shining through these 14 tracks. Featured are eight originals and six arrangements of classic songs, including "Joshua," "Fall," "Skylark" and "Somewhere Over The Rainbow."

"...one of the best composers and players around anywhere. Period." - Dave Liebman

Midwest Record (Chris Spector)
After earning high praise from Dave Liebman, Zilber redefines what ambition and drive mean by coming forth with a twofer that features a bicoastal recording in which the sax man pulls out all the stops in arranging for big band. Highlighting what makes each coast special rather than pitting them against each other, this is a modern monster of a se ...

Jazz Weekly (George W. Harris)
Tenor saxist and leader Michael Zilber delivers two different big bands, one from the East Coast and the other from San Francisco on this two disc set. The "East" team has some nice mysterious work on the Wayne Shorter piece"Fall" with bold brass punching away on "Joshua". Tough tenors go gunning on "The Breckerfast Club" and an elegiac "Fantasia o ...

All About Jazz (Jack Bowers)
On East West, his first-ever big-band enterprise, Canadian-born saxophonist Michael Zilber leads world-class ensembles in New York City and San Francisco, which speaks volumes about his artistry and gravitas. Zilber not only plays saxophone on both bands, he composed eight of the fourteen numbers on this handsome two-CD set and arranged all of them ...

LINER NOTES (Andrew Gilbert)
"East West – Music for Big Bands embraces multiplicity. It's not either/or, it's and/also. It's beauty AND burn, intense swing AND sweet balladry, all united under Zilber's commanding and ever expanding creative purview." The truth is that Michael Zilber can't be defined by a simple geographic duality. The saxophonist contains multitudes as a ...

Jazz Journal (UK) (Bruce Crowther)
Contemporary big band music is in short supply nowadays, and so for that matter are big bands. Canadian-born Michael Zilber ably compensates for the first of these deficiencies with his composing and arranging. His compositions, of which there are eight here, are strikingly original, while his arrangements are very much of today yet remain acces ...

The New York City Jazz Record (Marco Cangiano)
Michael Zilber's resumé is rich and varied, deserving much wider recognition. Originally from Canada, he spent the first part of his career in New York then moved across the country to San Francisco, where he now resides. This is by far his most ambitious project and first recording with big bands, following the very successful Originals for the O ...