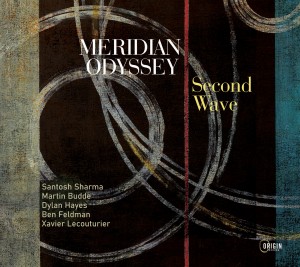 Meridian Odyssey is certainly a band to keep a collective eye on as time swings by...
Paul Rauch

Five brilliant and focused musicians who against odds imposed by history and impossibility, have risen to the occasion to create a recording that provides depth, joy and emotional outreach in times of isolation and hardship. Developing their musical voices on the Seattle jazz scene, bassist Ben Feldman and saxophonist Santosh Sharma moved to New York for school and opportunity, while drummer Xavier Lecouturier, pianist Dylan Hayes and guitarist Martin Budde became invaluable creatives in Northwest music circles. Sidelined from various tours in 2020, the five ended up gathering in Alaska, learning to fly planes, composing, playing, and discovering that as a quintet, the joy of music and creation was rekindled, the weight of the moment lifted. Setting up in an airplane hangar, the quintet live-streamed performances through the summer and with their new compositions in tow, self-recorded and produced Second Wave. The commonality of language acquired through hours of musical conversation between this group of friends quickly rose to fruition, producing sublime results for the listener.

Jazz Weekly (George W Harris)
Drummer Xavier Lecourier leads a post bop team of Santosh Sharma/ts, Martin Budde-Lucas Winter/g, Dylan Hayes-Gus Carns/key and Ben Feldman/b through a collection of modern post bop pieces. He takes the pen to intricate "Interlake" that weaves together work by Sharma and Budde, while the saxist's "Second Wave" is a sophisticated melody propelled by ...

All About Jazz (Dan McClenaghan)
Seattle's Origin Records opened 2021 on a hopeful, turning-of-the-page note with Second Wave, by the group Meridian Odyssey. The band comprised five young (twenty-something) Seattle-ites who took advantage of the time on their collective hands, and the low air fares resulting from the COVID-19 pandemic, to journey to Alaska, where guitarist Martin ...

Midwest Record (Chris Spector)
A bunch of musical pals from Seattle wind up under lock down in Alaska learning to fly planes and live streaming nu jazz when the mood strikes. With a throw back to some of the groovy stuff that came out of the Midwest in the 70s like Sweetbottom, Matrix, Ross Traut and others, it represents the easier side of fusion with the feel of Oregon, but f ...

KNKX, New Cool (Abe Beeson)
If you've been following the Seattle jazz scene, no doubt you know a few of the musicians calling themselves Meridian Odyssey. They've played as sidemen with many of the city's top players and spent hours working together in each others' bands. Despite and because of the pandemic, the quintet of friends found room to collaborate in socially distanc ...

Seattle Times (Michael Rietmulder )
Even in a tough year, Seattle musicians continued putting out exceptional music. Here are 15 of the best albums (so far) During the pandemic, this crew of hotshot young jazz players retreated to Alaska to crush salmon and record one of the year's most well-received Seattle jazz records in an airplane hangar. From the dulcet guitar-and-sax-led open ...