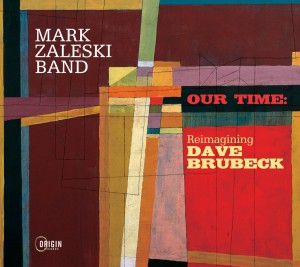 Boston-based saxophonist, Mark Zaleski, pays tribute to one of his mentors, revisiting several of Dave Brubeck's more vital works and filtering them through a modern lens. Mark and his brother, pianist Glenn Zaleski, were two of the first students selected to the Dave Brubeck Institute, where they shared the stage with him at the Library of Congress and the Monterey Jazz Festival. Brubeck always encouraged Mark to "find his own voice," and he does just that by offering alluring sonic landscapes for Brubeck's melodies and making striking choices in groove and orchestration. From the searing guitar work and fiery New Orleans funk of "Unsquare Dance," to the classically inspired opening of "Softly, William, Softly," or the epic "They Say I Look Like God," with the chilling vocals of Michael Mayo, the joy and respect Zaleski has for his mentor's memory is evident and heartening.

The Answer Is In The Beat (Paul Simpson)
Boston's Mark Zaleski pays tribute to his biggest influence with a set of Brubeck interpretations. While the compositions are recognizable, he does add new elements to them and avoids being too faithful, because you can just listen to the originals if you want to hear them the way Brubeck arranged them. "Blue Rondo a la Turk" opens the set, and it ...

The Blade (Toledo) (Tom Henry)
Perhaps we need to start off by saying what isn't on this Dave Brubeck tribute album. There's no "Take Five." Though composed by saxophonist Paul Desmond, it was recorded by Desmond, Brubeck, and other members of the Dave Brubeck Quartet on July 1, 1959, for what became the group's legendary album, Time Out. A worldwide sensation, "Take Fi ...

Canción a Quemarropa (Canary Islands) (Héctor Martin)
This next September 17, 2021 will see the light of the last release of the record company Origin Records under the title of Our Time: Reimagining Dave Brubeck, a recording of Mark Zaleski Band. The Mark Zaleski Band is a powerful sextet led by the saxophonist and arranger that gives the band its name. On Our Time, Mark serves as frontman for the ...

Making a Scene (Jim Hynes)
Our Time is far edgier than one might guess, considering that the Mark Zaleski Band is reimagining the music of Dave Brubeck. Mark Zaleski is featured here on alto and soprano saxophone alongside tenor saxophonist Jon Bean, pianist Glenn Zaleski, guitarist Mark Cocheo, bassist Danny Weller, and drummer Oscar Suchanek. In addition, Our Time features ...

La Habitación del Jazz (Madrid) (Editor)
Mark Zaleski (Boylston, MA), was born into a family that loved music. His parents were fans of rock and pop music from the 1960s and '70s, such as The Beatles, Jimi Hendrix, Led Zeppelin, The Temptations, and Stevie Wonder. His friends were fans of 1990s punk and metal bands like Nirvana, Metallica, and Pearl Jam. His brother, Glenn Zaleski, and hi ...

The Patriot Ledger (Jay N. Miller)
Saxophonist Zaleski, a native of Boylston, studied as a teen at the Dave Brubeck Institute and now teaches at the New England Conservatory. His sextet includes brother Glenn Zaleski on piano, Mark Cocheo on guitar and Jon Bean on tenor sax, along with Mark Zaleski's alto and soprano saxes. Re-doing Brubeck music is a tall order, not least because o ...