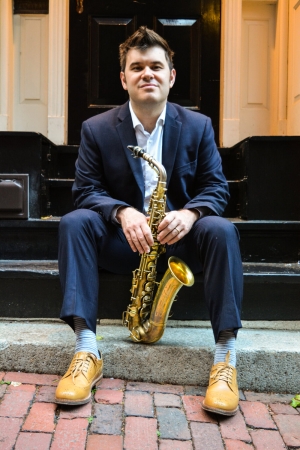 No one will ever accuse the Mark Zaleski Band of being boring.
The Patriot Ledger

Growing up in the small town of Boylston, MA, Zaleski was influenced by the musical tastes of his friends, family, and teachers. His parents were fans of rock and pop music from the 1960's and 1970's like The Beatles, Jimi Hendrix, Led Zeppelin, The Temptations and Stevie Wonder. His friends were fans of punk and metal bands of the 1990's like Nirvana, Metallica, and Pearl Jam. His brother, Glenn Zaleski, and his music teachers listened to jazz artists such as Dave Brubeck, Ray Brown, Oscar Peterson, Cannonball Adderley, and John Coltrane.

His unique approach to jazz led him to become the first alto saxophonist selected to the prestigious Dave Brubeck Institute Fellowship Program in Stockton, CA in 2003. Zaleski spent those two year performing with his virtuostic peers and learning from established pros such as Bobby Watson, Ndugu Chancler, Conrad Herwig, Eric Harland, Greg Tardy, Rufus Reid, Robin Eubanks, and Mic Gillette. Upon completion of the Brubeck Institute, Mark continued his studies at The New England Conservatory of Music in Boston, MA. It was at the New England Conservatory that he was able to study with some of the most influential teachers of his life, Charlie Banacos and Jerry Bergonzi. While at The New England Conservatory, Zaleski began to delve deeply into composition. His compositional style derives itself from the music he grew up listening to while still drawing from his training as a jazz musician.

While the band has no vocalist, Zaleski takes on the lead voice channeling a combination of his saxophone heroes and inspirational vocalists like Stevie Wonder, Robert Plant, Michael Jackson, and Donny Hathaway. This sound proved to be a unique voice in music, and started touring at clubs, colleges, and festivals around the country. Notable appearances have been at Small's in New York City, Ryles in Boston, Egan's in Seattle, Johns Hopkins University in Baltimore, and Vitello in Los Angeles.

The personal relationships within the ensemble is one of the most important and unique aspects of the Mark Zaleski Band. Beginning at the ages of 10 and 8 years old, Mark and his brother, Glenn Zaleski, have been playing music and creatively callaborating together for the past twenty years! Since meeting at The New England Conservatory, Zaleski and tenor saxophonist Jon Bean have played together as a saxophone duo for 10 years and work together as if one mind is manipulating both of their musical voices. These are only two examples of how the interpersonal relationships within the band play a major role in creating its sound.

Additionally, Zaleski is active in many musical projects including the Omar Thomas Large Ensemble, The Brighton Beat, John Allmark Jazz Orchestra and the Either/Orchestra. He also is on faculty at the Berklee College of Music and Longy School of Music at Bard College.

MZB is what Mark describes as his "passion project." It is an ever evolving musical concept and continues to explore the various creative gifts of it's ensemble. Zaleski hopes to live up to a claim the Patriot Ledger once made of his band; "no one will ever accuse the Mark Zaleski Band of being boring."