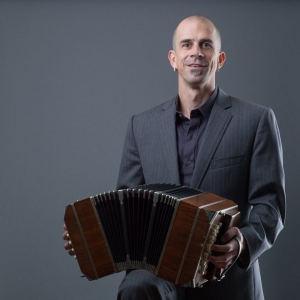 Coming from a rich career as a jazz vibraphonist and composer, Ben Thomas found himself enthralled by the sounds and history of tango music, first as a dancer and then as an avid student of the bandoneon. Through his fifteen-year journey, Thomas took trips to Buenos Aires to hear & study with the masters, eventually finding his own voice in the music and performing widely. With "Eternal Aporia," Thomas presents the debut recording of his Tango trio with clarinetist Eric Likkel and bassist Steve Schermer, exploring tango through its encounters with new times and new influences. Following the lead of some of the leaders of the current scene in Buenos Aires, such as Diego Schissi and Exequiel Mantega, Thomas builds his intricate pieces combining rhythmic intensity with lush harmonies, whimsy, and an emphasis on story telling. "Ben is a great composer, and an energetic performer who knows how deep music can go." - Jovino Santos Neto