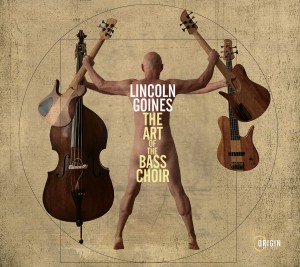 Leaping genres with this kind of authority is a talent within itself, and the success he has had certainly acknowledges his obvious commitment to artistic integrity.
Bass Musician Magazine

At the top level of New York City's jazz, Latin, and studio scenes for four decades, bassist Lincoln Goines has put together this highly ambitious recording for his debut as a leader. With elegant textures inspired by Bill Lee's New York Bass Violin Choir and Steve Swallow's upper register explorations, Goines created a collage of styles and moods, built on a collection of favorite tunes and textured within the parameters of clearly voiced low end instruments—indeed, an "exquisite jungle of bass!" Pulling in ten world-class bass friends including Ksenia Vasileva, Victor Wooten and John Patitucci, and drummers such as Robby Ameen and Dennis Chambers, Goines has created a one-of-a-kind listening experience, celebrating the musical range of the instrument and the fellowship of those devoted to anchoring ensembles through time.

Reviews of The Art of the Bass Choir

Jazz Weekly (George W Harris)
Playing more varieties of bass that could be listed in a review, Lincoln Goines celebrates the bass with a wide variety of guests including Tom Kennedy, Goins Vasileva, Victor Wooten, Susan Hagen, Gal Aviram and Mike Pope (am I missing anyone?) supported by a clever support team of drummers. The choice of famed stick man Dennis Chambers is a brilli ...

CirdecSongs (Cedric Hendrix)
When it comes to more experimental records, there's a fine line between innovative and self-indulgent. Bassist Lincoln Grimes has successfully remained on the right side of the tracks. Along with a stable of legendary bassist guests — among them Victor Wooten and John Pattitucci — Goines looks to push the bass in fascinating directions without ...

Bass Magazine (feature) (Chris Jisi)
Consider the tenuous realm of multiple basses in music. To this point, brave subterranean-minded souls have sought such settings in all shapes and sizes, and most genres — be it chamber-written pieces, recordings with a host of bassists' parts flown in, or all-star jams at bass events. The outcomes have varied from deep rivers of rich vibrations ...