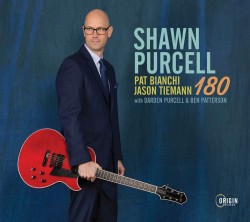 Guitarist Shawn Purcell's latest CD, 180, is all about swinging; Purcell's trio, Pat Bianchi on Hammond B3 organ, Jason Tiemann on drums, nestles squarely into the groove on the double-quick opener, "Cat and Mouse," which sets an upbeat tone for the album as a whole.

The rhythm seldom flags on Purcell's sunny compositions (he wrote all but one of the album's eleven numbers). An exception to the rhythmic rule is the lone standard, Johnny Mercer & Paul Francis Webster's lovely ballad, "A Time for Love," on which Darden Purcell sings (quite nicely). Darden Purcell scats on "Chicka D" and "Soul Blue," on the latter trombonist Ben Patterson makes it a quintet. While Shawn Purcell explains that a second ballad, "LTG (Little Tori Girl)," and the funky "Window Games" were written for his and Darden's cats, no reason is offered for the name "180"—nor should one have to be.

Bianchi is a topnotch soloist, Tiemann a sharp and forceful drummer who has some of his best moments on "Window Games." The laid-back "Soul Blue," which follows, elicits flickering images of Henry Mancini's classic theme from the film The Pink Panther. Patterson's solo is so ingratiating that one wishes he could be heard from more often. "Soul Blue" leads to the suitably-named finale, "Search and Destroy," whose emphatic approach neatly sums up the album's purpose; all hands solo admirably.

Shawn Purcell's other compositions are "Fond Illusion," "A Long Stroll" and "Hoodang," each of which swings neatly in its own way. For his part, Purcell is a well-known musician in the Washington, DC area, having logged substantial time with the US Air Force's superlative Airmen of Note and Navy Commodores (in whose ranks Darden Purcell has also served). The guitarist's influences range from Pat Martino (an inspiration for the organ, guitar and drums lineup) to Grant Green, Wes Montgomery and George Benson, among others. He brings each of them to bear at various times on 180, a buoyant and well-planned session which summons the best from everyone involved.