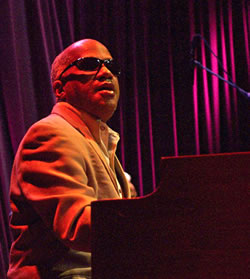 The Deep Blue Organ Trio's organist, Chris Foreman, is a masterful musician and heir to the throne occupied by the soulful, bluesy jazz organ legends who were once his influence. Blind at birth, Foreman started playing piano at age five and began formal training at seven.

As a teenager he was attracted to the organ sounds of Jack McDuff, Groove Holmes, JimmySmith and Jimmy McGriff. This attraction led Chris to pursue playing jazz on the organ, which he undertook through intensive study of recordings. Unlike many African-American musicians whose musical knowledge begins and is established through the church, Chris didn't start his apprenticeship as a church organist until he was almost twenty years old - well after his jazz roots were established.

He has arrived at a most exciting blend of blues-gospel and jazz and has developed a stunning command and range on the instrument. The blend of his sound is evident in his professional experience, which has included work with Hank Crawford, Albert Collins, Bernard Purdie and The Mighty Blue Kings.